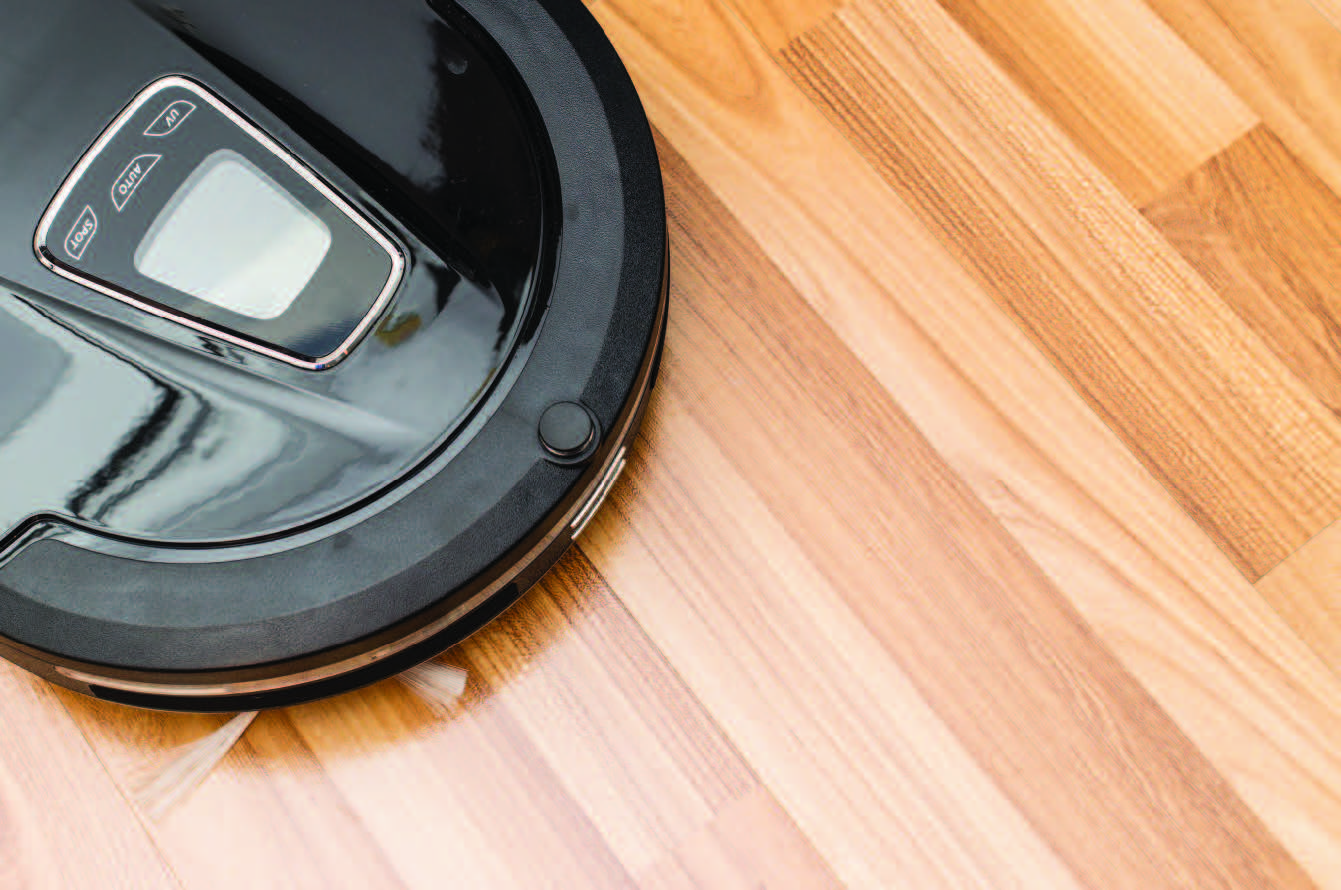 I Now Pronounce You Roomba & Wife -

What happened to the domestic robot revolution?

A decade ago, Bill Gates made a bold prediction to readers of Scientiﬁc American. The visionary billionaire heralded the coming of a revolution in domestic robotics, writing that they could have “just as profound an impact on the way we work, communicate, learn and entertain ourselves” as the PC. Some time in the relatively near future, he believed, the typical American household would feature robots that clean the home, prepare food, do the laundry, dispense medicine, mow the lawn, provide security and drive the family car.

Fast-forward to 2017. The future of robotic “home helpers” is moving at a Roomba-like pace. 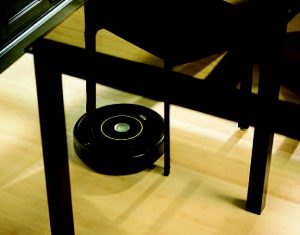 Ah, Roomba. Admit it, back when the autonomous vacuum cleaner debuted in the early 2000s, you envisioned a not-too-distant future populated by droids that relieved your family of the dreaded Three D’s: dull, dirty and dangerous. You know, the stuff you’re already willing to pay someone else to do. Americans did buy something like 10 million Roombas and, over the years, new models became smarter and more reliable. But honestly, is this where we thought we’d be at this point?

The main obstacle to the long-promised domestic robot revolution has been money. The developers who should be creating game-changing household helpers have been focusing their talents on industrial and military applications. Why? Because that’s who’s paying good money for the technology. These are customers that have calculated a return on investment and given robot manufacturers lucrative contracts that guarantee a high degree of economic certainty. 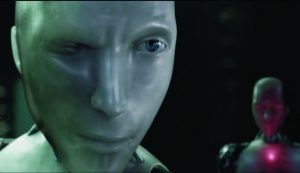 How much would you pay to have a gleaming, capable, intelligent, articulate C3PO shufﬂe into your life? What would your neighbor pay? What would your mom or dad pay? This is the problem; no one can really answer these questions yet. Right now, the job of creating a truly functional I Robot-style household helper is too big, too complicated and too expensive. Churning these units out in sufﬁcient numbers to make them affordable would seem unfeasible for decades to come. For that to happen, robots would have to get a lot more effective when it comes to relating to humans, and someone would have to make a huge investment to accelerate this process.

Neither point, it turns out, is a deal-killer. Futurists and technology experts agree that performing mundane household chores happens to be a great proving ground for the next generation of robots, not just domestic ones. For example, an ironing robot recently developed at

Columbia University had to overcome two obstacles: understand how much pressure to apply to a garment and recognize wrinkles. Both tasks relied on extremely advanced scanning and sensing technologies—the kind that would absolutely have to be a part of any household robot. These technologies, in turn, would be needed in the development of robots that would one day replace highly skilled, highly paid workers who do exhausting or dangerous jobs. So the incentive is there to chase after the domestic market as a sort of stepping stone to bigger and better things. 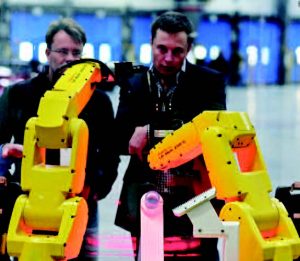 These types of advances ultimately rely on the great leaps in artiﬁcial intelligence (AI). For visionaries like Elon Musk (above), those leaps can’t come soon enough. The man behind Tesla, SpaceX and other high-proﬁle ventures is now devoting his considerable resources to accelerating artiﬁcial intelligence in ways that will push the robot revolution forward. He is one of several tech giants bankrolling a non-proﬁt company called OpenAI (openai.com), which has established the near-term goal of making a domestic robot.

According to the company’s web site, OpenAI is “working to enable a physical robot (off-the-shelf; not manufactured by OpenAI) to perform basic housework. There are existing techniques for speciﬁc tasks, but we believe that learning algorithms can eventually be made reliable enough to create a general-purpose robot. More generally, robotics is a good test bed for many challenges in AI.” Musk sees robots as instruments of positive change that will beneﬁt humanity rather than harm it. This, he believes, can be accomplished by freely collaborating with other institutions and developers, and making its patents and its research open to the public

So, you ask, when will my Roomba masseuse be ready to lay its robotic hands on me?

Not so fast. Giving robots the level of AI required to administer a deep-tissue massage is not something we should do without considering the possible consequences. Stephen Hawking, for one, believes that bestowing the ability to learn on machines will lead to the ability to re-design themselves. That ability, he maintains, poses an existential threat to humanity, because this will happen at an ever-increasing rate until robots decide that humans are an unnecessary annoyance. Imagine a worldwide web of domestic robots that suddenly decide we’re not worth keeping alive anymore. Musk and his co-investors happen to share this apocalyptic vision of robots gone wrong. They believe that the openness of OpenAI is the best safeguard at this point

What’s out there now? The fact is, a typical household could conceivably own a half-dozen or more robots right now. The Roomba is one of a number of devices that do things as well (or almost as well) as an unskilled human. In this EDGE issue, in fact, we feature two in our gift pages: a robot gutter cleaner and a robot kitty litter cleaner. The advantages of the litter cleaner should be obvious to anyone with a cat. It senses when a feline is ﬁnished and scoops its waste into a drawer in the base with a carbon ﬁlter to cut down on the odor. It’s a robot in a very basic sense, in that it relieves humans of sifting and scooping. The gutter cleaner is a more specialized item that still requires its owner to climb a ladder in order to turn it loose. It then buzzes along, dislodging and ejecting leaves and debris. Anyone who owns these items almost instantly realizes what the truly ”robotic” versions might one day do: deposit the cat waste 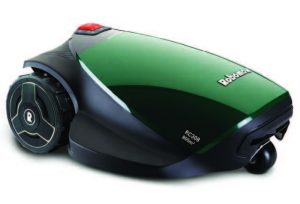 in the garbage, and levitate in and out of gutters without the use of a ladder. The AI involved in these advances is formidable, to say the least.

Right now the household robots that enjoy the most success tend to be outside-the-home devices, such as robotic pool cleaners and lawn mowers. Pool-cleaning robots work like relentless miniature tanks, crawling along the pool bottom and sides, power-washing and suctioning. Solar-powered robotic pool skimmers have also become popular. The same companies that produced “automatic” pool cleaners have all added AI to their units, jumping on the robotic bandwagon.

Several companies now make robotic lawnmowers. They operate cordlessly, much as a Roomba would. Most models run automatically, on a schedule the owner determines. There is an advantage here because two or three “touch-ups” instead of a big cut allows the trimmings to work their way back into the soil instead of turning brown under the sun. The mowers require an invisible dog fence-like wire to be installed around the perimeter of your property, but after that it’s pretty much a set-it/forget-it operation. If they miss a few spots (which they almost invariably do) a few whacks with a string trimmer and you’re done. A good robo-mower will run you upwards of $1,000 and possibly upwards of $2,000. That’s the one-season cost for a good lawn service, so these machines do pay for themselves.

For most people, the ﬁrst foray into household robotics tends to be an exterior product—a pool cleaner or lawnmower, for example. Is it because we want robots to “prove themselves” on the other side of a thick wall before we invite them into our homes? Certainly, the issue of human trust is a key component of the domestic robot revolution, and at the moment we don’t really trust them enough to invite them into a more intimate relationship. That may change soon, because AI is all around us—monitoring our likes and dislikes, anticipating our interests and desires, and creating a comfort level that will serve as a gateway to human-robot partnerships inside our kitchens, bathrooms, and wherever else we want to save time and avoid drudgery.

What are the folks behind the domestic robot revolution doing to get us to that point?

First and foremost, they are focused on interaction. Domestic robots need an interface that is both engaging and comfortable. Some important groundwork has been laid by Apple with Siri and Amazon with Echo, its intelligent personal assistant. As much as humans like to think that we are “teaching” these technologies to work with us, we really are the ones being taught. The other piece of the interaction puzzle is the development of AI with which we don’t have to interact. The more household devices learn about who we are, what we’d like them to do—and how and when we’d like them to do it—the better. No one enjoys having to remind a spouse or housemate to do something over and over again. We’ll be even less enthusiastic if we have to tell a machine the same thing more than once or twice. We’ll want our domestic robots to be subservient and respectful of our precious time.

In terms of a domestic robot’s appearance, the jury seems to be out. Do we want to share our living space with a humanoid machine? Those who say yes are probably looking for an element of companionship in a robot. Which is absolutely okay. Those who say no recognize that a domestic robot in a human package would likely encounter a number of physical obstacles and be a lot more expensive that something more utilitarian. One that looks more like an “appliance” and less like a person will be just ﬁne. I believe that household robots are more likely to take the form of beloved droids in popular culture—maybe Rosie 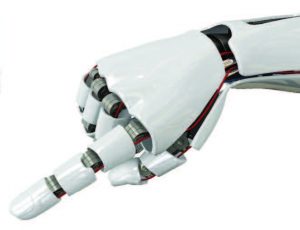 If and when we do develop the technology to give our robots human bodies—both inside and out—it strikes me that they would quickly become a lot more than mere domestic workers. Think about it. They would look and sound like humans. They would be smarter, kinder and more intuitive than people, too. If they cook, clean, shop, drive and do home repairs well, doesn’t that make them domestic partners? If my wife found someone who could do and be all those things, she’d leave me at the nearest jughandle. I pity the fellows who’ll have to compete with robot suitors a couple of generations from now.

There is a ﬁnal consideration where humanoid domestic robots are concerned.

Should we actually get to the point where our robotic helpers do look and function like Sonny, why would we keep them cooped up in the house? We’d want to show them off, right? In fact, assuming they were intelligent enough and mobile enough, wouldn’t we expect them to function as our surrogates, doing all the boring stuff we don’t want to do? Perhaps even our jobs? 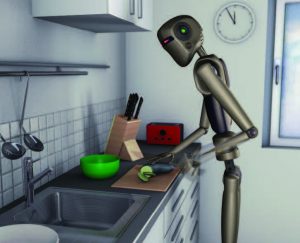 You can see why futurists believe there is a slippery slope to fully autonomous androids. At some point, household robots would just ﬁnd us to be a nuisance. And instead of us hitting the power-down button on them, they might be pulling the plug on us 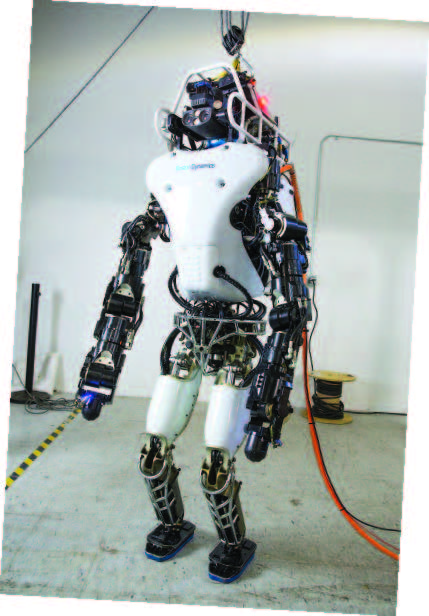 US Deparment of Defense

Not surprisingly, the good people at the U.S. Department of Defense are keeping an eye on the domestic robot revolution. As a matter of fact, they have also gotten in on the fun. In 2015, the Defense Department held a Robot Challenge with a $2 million ﬁrst prize. Twenty-three companies entered the competition, which required an “untethered” robot to complete eight tasks that mimicked activities of the ﬁrst responders to the Fukushima nuclear disaster. A Korean robot won. It was one of only two to complete all eight tasks, including walking across rubble, climbing steps, opening a door and driving a car.