More than ever, home is where the science is.

The construction industry consumes more natural resources than any other industry in the United States. Domestically, it will generate over $1.2 trillion in 2018. The homebuilding sector this year will produce 1.2 million units—more than double the number in 2009, during the depths of the financial crisis. Worldwide, construction projects make up nearly 15 percent of human GDP. Over the next decade, builders will be focused on catching up to the demand for rental housing, with anticipated funding from government sources, while pulling back from retail projects as online shopping continues to eat into brick-and-mortar profits. 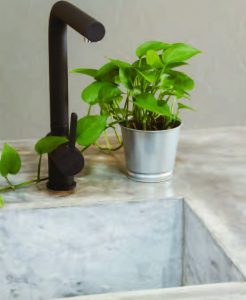 That’s a lot to absorb. So much so, in fact, that the facts and figures of the homebuilding industry have tended to obscure the quiet revolution that has been taking place— particularly at the higher end of the market—where a generation of scientific innovation is beginning to bear fruit for the rest of us humble homeowners. Over the next few years, breakthroughs in construction materials and techniques will trickle into the wider market and change the game for architects, builders, and consumers in exciting new ways. And save us all a lot of money.

Folks in the cement industry, for instance, will tell you that modern composites can now be engineered to have strengths rivaling steel and durability that, theoretically, could last for centuries—but which also can be fabricated to look like stone or other natural materials. These products are not only going to impact home exteriors, but are already showing up in interior concrete products, such as walls, floors and kitchen counters. 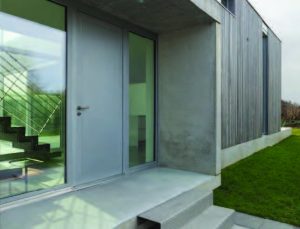 One of the more interesting developments in the science of cement is the elusive goal of creating a fracture-proof product. At some point, the weight a cement structure is asked to bear just overwhelms it and it begins to crack. (FYI, every building material has its “breaking point,” including steel). The primary challenge for ensuring fracture resistance is the structure of cement, in which everything in the mix sticks to everything else. That sounds good, but a structural engineer will tell you it’s not. It’s disorganized. 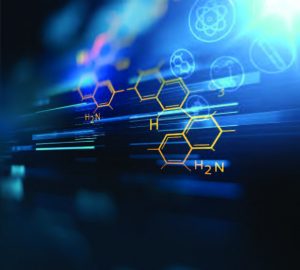 Last December, a team of German biomimeticists announced in Science Advances that they had found a way to reorganize the structure of cement to create fracture resistance at the “nano” level. Biomimetics is a branch of science that is unfamiliar to most of us; it studies and then “mimics” natural phenomenon in ways that can be employed in technical developments. In this case, researchers noticed something curious about sea urchin spines, which are made of an extremely brittle material called calcite. As anyone who’s had a barefoot encounter with a sea urchin knows, their spines are anything but fragile. So what’s going on, and how is that relevant to construction? The urchin’s secret is hidden at the molecular level, where nature has optimized the strength and durability of the spine material by layering it in a highly ordered way, with some molecules serving as a binding agent between the layers. Seashells and bones, the German team also found, often include this intriguing structure, which has evolved over hundreds of millions of years.

The outcome of their initial experiments would be astonishing to anyone who works in construction. The biomimetic cement they developed had a strength measured at 200 megapascals. Steel comes in at 250 megapascals. Care to guess what the number is for cement used in most home building projects? Five.

Perhaps one day in the near future, traditional brick-and-mortar may no longer be a thing. But the look of brick and mortar—at many times its strength and a fraction of its cost—is likely to be with us for a long time to come. Right now, in fact, an entirely new generation of insulating bricks has come online. The products offer the appearance of brick but are much thicker, with open spaces filled with insulating material (including polystyrene and perlite). They offer varying degrees of thermal conductivity and also have more construction strength than regular bricks. They essentially replace the insulation that needs to be blown or inserted into interior walls.

Earlier this year, EMPA (the Swiss federal science and technology lab) announced an entirely new material for insulating bricks: Aerogel. If this sounds like something you’d be more likely to find in a running shoe, well, you’re right. Aerogel is an ultra-light porous material that replaces the liquid one typically finds in a gel with a gas. Scientists call it “Frozen Smoke.” It’s actually been around since the 1930s, and recently was incorporated into another homebuilding material, insulating plaster, which has become popular among people renovating historic homes.

Used inside insulating brick, Aerogel’s insulating properties proved to be three times better than perlite bricks and eight times better than regular bricks. In other words, to achieve the same protection against heat and cold as you would using a foot of “Aero-bricks” you’d need to have an eight-foot-thick brick wall. The science is simple: 90% of Aerogel is comprised of stationary nano-bubbles, which prevent the transfer of energy through the movement of air molecules. As an added bonus, the material absorbs almost no moisture, is recyclable and non-combustible. Wow. 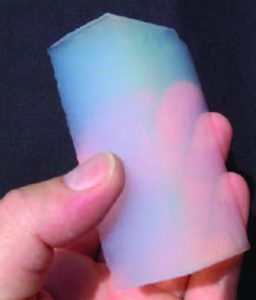 But wait. If you’re calling your contractor right now, put down the phone. Aerogel is hideously expensive in homebuilding quantities and won’t be available in insulating bricks for several more years. However, as with all good science, there are already folks working to up production, increase the economy of scale, and bring this product to market as rapidly as possible.

TRYING ON A ONE-PIECE

If a brick home seems too ordinary, you might want to make a little side trip on your next visit to San Francisco. Just outside the city, overlooking the Bay is America’s first composite house. The unique, ultramodern design was fabricated in nine layered fiberglass pieces that simply could not be built using traditional methods and materials. Manufactured by Kreysler & Associates, a leading-edge architectural composite company in California, the curved, two-story residence has been raising eyebrows and winning awards since it was completed in 2010. Company owner Bill Kreysler took on the project to demonstrate how composites could be mainstreamed into architectural design and construction.

The architects had initially designed a home that referenced the spectacular natural and geographic setting of the property and then spent a year trying to find a home builder who could handle it. No one was able to achieve their vision with traditional materials, so they turned to Kreysler. He scanned the small 1:30 3D model the architects had created and fed the data into a computer program that spit out a mathematical representation of the structure, which was then scaled up 30 times. Technically, the entire shell of the house could have been manufactured in a single piece and helicoptered into place. However, Kreysler could not obtain the permits required to fly it in (how cool would that have been?), so the home was split into nine pieces and trucked to the site—where it was bolted onto the foundation and then covered in a stucco material.

ALL THE HOME THAT’S FIT TO PRINT 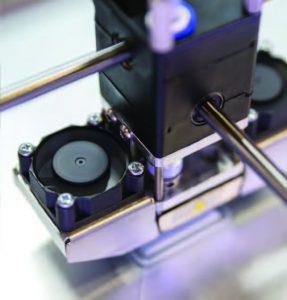 What else is on the homebuilding horizon? Hold on to your hat. We’ve been following the progress of 3D printing in this magazine for many years, though primarily for its applications in the medical and lifestyle areas. Enter the wiz kids at MIT. In 2017, they announced that they were developing a system that would enable builders to 3D print the fundamental structure of an entire house faster and cheaper than traditional construction materials.

Think about that for a moment. Every home created this way would be a custom home, only without the custom price. Not only would it enable homebuilders (and homeowners) to achieve an architect’s creative vision down to the tiniest detail, it would create the potential to design homes that would conform to a home site, rather than vice versa. 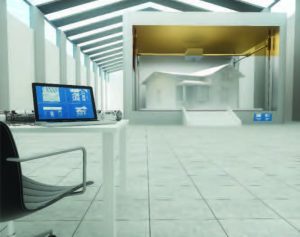 Unconstrained by the rules of engineering that currently restrict how homes are constructed using standard methods and materials, a 3D printed home could open the door to entirely new kinds of living spaces. And these homes would go up fast. Indeed, a prototype of the system completed a 12-foot domed structure with a 50- foot diameter in just over 12 hours. It was made of foam-insulated concrete and conformed to all of the local building codes. The printer’s prototype, mounted on a tracked vehicle, employed a precision-motion industrial robotic arm, which controlled a construction nozzle (similar to the ones that spray insulation). Unlike traditional 3D printers, where the nozzle is locked into a set structure, the MIT printer was unencumbered and could print anything, anywhere. 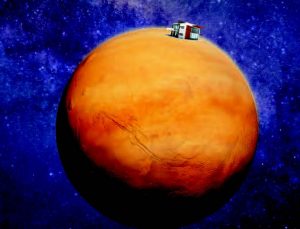 That means a home could be constructed to address its specific environment. For instance, walls could have varying degrees of insulation or thickness based on which direction (e.g. north or south) they faced, or be tapered or curved to perform in windy environments. Wiring and plumbing could be pre-inserted into the forms the printer creates. Complex shapes and overhangs that would simply be too costly or too difficult to create with traditional building methods, could be produced from various materials with the push of a button. In a paper published in Science Robotics, the researchers pointed out that the construction industry hasn’t changed in hundreds of years: “Buildings are rectilinear, mostly built from single materials, put together with saws and nails.” Obviously, the scientific community is aiming to change this narrative.

The MIT crew is already working on a new design that will enable the machine to do basic site preparation before the printing begins. In other words, it will be self-sufficient. The result is that homes and buildings created with a 3D printer will be faster, less expensive and safer to produce  And they could conceivably be built anywhere…from Antarctica to the moon to Mars.

What are the concrete folks doing to keep up with their cement brethren? First, let’s understand the difference. Cement is a gray, flour-like powder made of multiple minerals that mixes with water to trigger a chemical process causing it to harden. It is a construction material as opposed to concrete, which is best thought of as a masonry material. Concrete uses cement to bind crushed rocks and stones with sand. The production of concrete, it’s worth noting, releases a huge amount of carbon into the air, which is not good for the environment

Just this past April, researchers in England announced that they had found a way to use graphene to make concrete stronger, more durable and, most importantly, greener. Graphene is a form of carbon notable for its single layer of carbon atoms, which is arranged in a hexagonal lattice pattern. It is almost transparent, yet it is also considered the strongest material in the world. Interestingly, it conducts electricity and can also be levitated by magnets. (Area 51 are you listening?)

Like the Germans with their sea urchin cement, the Brits nano-engineered this breakthrough. Engineers created a technique for introducing graphene atoms into the mix in a way that is low-cost and compatible with large-scale manufacturing that already exists. Which means we could be seeing this concrete product sooner than later. The benefits will hopefully outlast us all. Initial testing showed that the new graphene-reinforced mixture is twice as strong and four times as water-resistant compared to current products. It also reduces the amount of carbon-belching materials used in the production of concrete by about half.

Interested in cutting-edge home tools and accessories? Well, the future is now. These two products transform your smartphone into a next-level “power” tool

Download the app and turn your smartphone into a digital key. Available at

Identify insulating and wiring trouble spots with a camera that plugs into your smartphone. Available at flir.com.