How a dream renovation became a nightmare… and how you can keep it from happening to you.

No home renovation project goes exactly as planned, regardless of how meticulously you’ve planned in advance. Deep down, most homeowners understand this. However, when a “home reno” jumps the tracks, it produces the kind of gnawing, roiling anger that can throw your entire life out of whack. I speak from experience. Last summer, with the kids out of college, out of the house and out in the world being solid (and self-sufficient) citizens, we decided to pop for an entirely new kitchen.

The time was right. Although we had inherited a perfectly functional kitchen from a previous owner, it was what my wife liked to call “dated” the day we moved in. Two decades later, as the cupboard doors were falling off their hinges, she usually inserted an expletive in front of “dated.” Those hinges, by the way, were stamped Made in West Germany, so yeah, they were [expletive] dated. The upside of waiting so long was that we completely agreed on the optimal layout. We knew what we needed and didn’t need, and set a budget that reflected all of these sensible choices 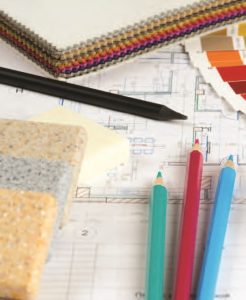 The final bill was about $40,000, which is about what we budgeted. There was a fair amount of custom work and carpentry involved, but it’s not a huge space so we thought the price was reasonable. The cabinets and countertops were first-rate and we could not have been happier with the results. My wife really put a lot of research and legwork into these choices and was unflustered when the stone place sold our first counters out from under us by mistake. She didn’t even freak out when our kitchen contractor failed to count the number of cabinets until a couple of weeks after they had been delivered, only to find out that the manufacturer had forgotten to build one. 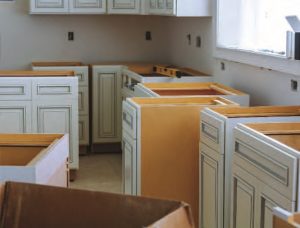 Less than 10 percent of our budget was dedicated to flooring. As luck would have it, flooring turned out to be 100 percent of the problem. We picked an installer who had an impeccable reputation. It was a family business that had been around for decades. The beloved father had given way to his daughter, who exuded the class and confidence you like to see in these situations. Her salesman came to the house and suggested a high-tech linoleum product that would give us the unusual floor design we wanted. It sounds icky, I know, but it was really cool (and not inexpensive).

We live in a century-old house on the side of a hill, so nothing is exactly straight. The kitchen floor has a bend to it that reflects 100-plus years of settling. The previous owner, a roofing company executive whom we knew to be meticulous, had solved this problem when he re-did the kitchen during the Bush I administration. The cabinets may have been disintegrating in 2017, but the floor looked as good as the day it went in. We just weren’t crazy about the look. As the salesman assured us that we had made a brilliant choice, I began to question whether he was thinking in two dimensions or three. Or whether he just said Yes to anything, collected his commission and then dumped the job on the workmen. No, he responded, this is a “floating” floor, so with some leveling in a couple of spots, it is actually an ideal choice. 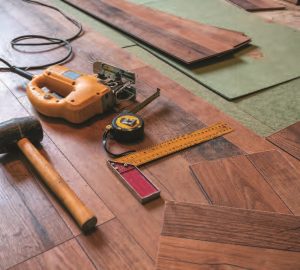 The renovation timeline, from demolition to completion, was four weeks. We aren’t stupid. We knew it would take longer. But our contractor and his carpentry crew, who did exceptional work, kept telling us this was a relatively simple, straightforward job. So of course, 24 hours after the flooring was installed, we knew something wasn’t quite right. In several places, the seams that were supposed to fit snugly together were curling upward to such a degree that you could almost trip on them. Needless to say, the cabinets couldn’t go in until this issue was addressed. Despite several conversations with the owner of the flooring company, she did not send anyone to look at the problem, nor did she make the 20-minute drive from her office to our house to evaluate the problem for herself—for more than six weeks from the day we first alerted her that something was obviously wrong.

As anyone who has lived through a kitchen reno knows, there is no part of your family routine that isn’t completely disrupted during construction. We had a second refrigerator in the basement, which was great, but our only cooking appliances were a toaster and a microwave, which we moved into the library. (Full disclosure, the “library” isn’t as fancy as it sounds—it’s a room with two bookshelves and we couldn’t think of a better name for it). Meanwhile, a fine layer of dust settled on everything we owned.

Finally, the flooring company owner showed up. She rattled off a series of theories and excuses for why the material failed. Most of them sounded like they were our fault or the fault of someone who no longer worked for her. We countered each with the same question: Why didn’t you come the day after we told you there was a problem? Her answer was that she had worked with this product for years and never had a problem. As the words crossed her lips, I could tell she wanted them all back. If that was the case, then you should have been here an hour after  we called, not six weeks later. She sent in a crew to fix the problem but it was really too late

The cabinets had been installed around the trouble spots in the flooring, and within a few weeks of their “fix” the seams began to separate. There is no way to fix this and there is no way they will ever see the balance of the invoice they sent me after they walked out the door (without so much as an apology).

This was not our first brush with an unprofessional home improvement professional. We hired a local guy to do some much-needed re-shingling and lay a new roof over a large enclosed porch. This was in the fall of 2012. He disappeared after Sandy, the shingling unfinished and within a year, the incomplete roofing job began leaking into our family room. Oh, and by “disappeared,” I mean he began working for my across-the-road neighbor, who had deeper pockets and more appealing indoor projects. Back in the mid-1990s, when we owned a house overlooking the Hudson River in Weehawken, we sprang for an addition in anticipation of our second baby. The contractor did fine work except for one thing: He was 5’2” and I am 6’2”. I still have marks on my head where I constantly banged it on the bay window he installed exactly 6’1” above the back entrance to the home.

I’ve had my issues with contractors on smaller jobs, including one who pocketed the money and then disappeared into the wind. And we’ve had some great people work for us, too. Each time we hire someone, I hop on the web and read about renovation nightmares and how to avoid them. Over the years, I’ve made my own list of do’s and don’t’s, which I am always willing to share and continuously update. They are as follows…

AS SEEN ON TV 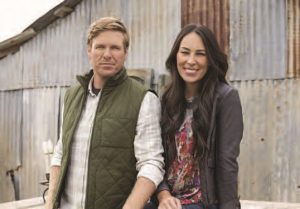 Home renovation shows come in all shapes, sizes, and formats. As a group, they represent the most popular and profitable genre of television programming. HGTV leads the way in this category, airing Fixer Upper, Flip or Flop, Ellen’s Design Challenge, Brother vs. Brother, and Property Brothers—with a total of 15 million viewers. According to HGTV’s on-air talent, these are five of the most common (and costly) home renovation mistakes: