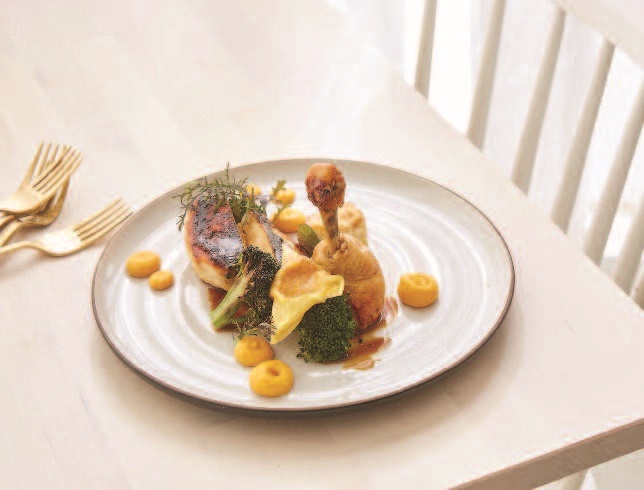 “Duck is Viana’s signature dish, and no matter the micro-season, he works what’s fresh and what’s purposeful into his nightly duck program.”

When it comes to people with one-of-a-kind voices, New Jersey has given birth, or a place to work and live, or prominence to more than its share of singular talents.

Now consider that Alice Waters, impresario of the ground-breaking Chez Panisse in Berkeley, CA, founder of the Edible Schoolyard initiatives and modern-day instigator of eating local and organic food, is from Chatham.

Yes, Alice Waters, whose influence on what and how we eat today is comparable to The Beatles’ influence on rock, is Jersey born and raised.

Time to take your medicine, Garden State denizens. Time to toss to the curb the cliches of New Jersey’s mass-produced culinary past promulgated by those intent on keeping original voices at bay while promoting the same old pizza and pork roll places, the overstuffed hoagies and subs and leaden bagels, as well as the ‘dogs, doughnuts and diners that give credence to out-of-town critics’ rants.

For there’s a new breed of chefs in New Jersey, and they are skilled, savvy and seeing things clearly now.

Leading the way are nationally regarded chefs, such as Dan Richer of Razza in Jersey City; Maricel Presilla of Cucharamama and Zafra in Hoboken, and Drew Araneo of Drew’s Bayshore Bistro in Keyport, as well as critically acclaimed voices with relatively new restaurants that include Ehren Ryan of Common Lot in Millburn; Greg Vassos of Brick Farm Tavern in Hopewell; and Randy Forrester of Osteria Radici in Allentown.

Factor in the wealth of ethnic restaurants that reflects the vibrant cultures and communities rooted in this, one of America’s most diverse states, adding both talent and a gastronomy that extends to all parts of the globe, and you have a collective table that groans glorious. It’s a simple mix of good ingredients and good people. 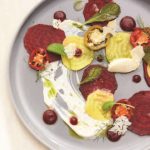 It’s just what the doctor ordered as a prescription for eating in 2018.

David Viana, now chef-partner at Heirloom Kitchen in Old Bridge, could be the poster child for the vanguard born out of old guard.

He is Portuguese, raised in the traditions of the table, and took in the ways of professional cooking at some of the best restaurants in Europe, New York and New Jersey. Anthony Bucco, executive chef at the empire that is Crystal Springs Resorts in Sussex County, lauds Viana as the “most talented, gifted chef” he’s worked within a pro kitchen. Visionary chefs including Vassos and Ryan are honored to be part of collaborative dinners with Viana; young chefs, notably Jon Boot, now at Ryland Inn, Whitehouse Station, and Sean Yan, current pastry chef and assistant to Viana at Heirloom, are inspired by his food.

Because it’s unlike any other.

I’ve eaten a half-dozen dinners in as many months that either Viana created or collaborated on and find his voice to be, at present, the most original in the Garden State.

Viana starts with a main ingredient as his inspiration, be it duck or spring peas, apples or porcinis, scallops or cauliflower, and builds from there. His accents challenge and enlighten, yet they stop shy of being fussy. They are always artfully applied. 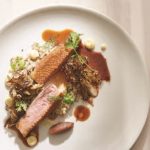 Art on a plate scares me. I’ve seen and tasted too much artifice. Viana’s washes, pin-dots, and arcs of sauce, spears of vegetable, frothy poofs of concentrated herb and ringlets of leafy things never do anything but enhance the main element. The “art” supports, and shows, Viana’s control over a plate.

I’ve watched Viana in his open kitchen at Heirloom Kitchen—which is a restaurant three nights a week and a classroom other evenings—break down a duck: butcher the duck, score its fat, prep it till it’s ready to be called upon for a precise 40-minute stove-top sear that will star in a seasonal preparation. In the space of a few weeks late last year, there were two of note: johnnycakes and oatmeal, persimmon and delicata squash and a rush of pomegranate on a regular-dinner night in early December at Heirloom, and one with herbed wheat berries and granola, parsnips and date puree, coffee and pecans, and the unmistakable umami of maitakes with a squirt of duck jus at the venerable James Beard House in New York, where Viana was invited to cook dinner days before Christmas.

Duck is Viana’s signature dish, and no matter the micro season, he works what’s fresh and what’s purposeful into his nightly program. Viana’s regulars might have duck every month at Heirloom, without duplication.

They also might have pork belly with a bacon marmalade and loops of Vietnamese caramel, the richness of which is offset by thick-cut half-moons of celery and salty peanuts. They might have pork-smoked apple raviolo and come across on the plate a bacon-pine nut crumble there expressly to play off the pasta pockets with a slyly silky texture—as well as pivots of delicata squash and sweet potato and a splash of mustardy jus.

Scallops in cold weather will be appropriately accompanied by dug-up vegetables such as fingerling potatoes and carrots, both of which are roasted and—with the scallops —given a choice of playmates: almond-mint pesto, chestnut puree, and lemon-brown butter emulsion. The accent editing is pitch-perfect. Likewise, halibut will see kohlrabi smoked and pureed, chanterelles gently warmed, an egg yolk scented with truffle and mustard seeds pickled to give them added depth and a defiant edginess that the mild, dense, meaty fish appreciates.

Viana rises to the challenge of sides: Cauliflower gets a sultry-snappy lift from pomegranate molasses and mint pesto; kale is laced with duck confit and topped with a fried egg; Brussels sprouts are plied with a gastrique that bristles with mustard and then all’s calmed by the inherent sweetness of butter infused with, of all things, parsnip. You have to think: Sides? These are sides? They could comfort and cosset and fill in a bowl by themselves, eaten on a couch. Yes, they could. But they appear on Viana’s Heirloom menu, to be passed family-style at the table or counter, depending on where you sit.

If you are at Heirloom Kitchen, which is owned by Neilly Robinson, you will be seated (depending on your choice and the availability) at the chef’s counter, facing the stoves at which Viana cooks. A row back, there is another counter, also with a “view,” but without the same opportunity to watch, and converse with, the chef. Then there are tables of the regular dining-out sort—two-tops and four-tops, and a larger one for parties of perhaps 10.

I’m not forgetting dessert, made by Sean Yan to suit the Viana style. Lemongrass mousse, for instance, is backed by gingerbread and plated with white chocolate that’s been roasted and mint that’s been pulverized to the texture of dust. There’s the suspicion of bourbon in the mix, and a whiff of Asian pear.

But don’t count on repeats of anything you read here right now. In the world of a singular voice such as David Viana, yesterday is history to learn from, today provides a chance for change, and tomorrow is the opportunity to play out a dream deemed a privilege to share.

New Jersey, after all, thrives on its one-of-a-kinds

Major credit cards accepted. Open Friday, Saturday, and Sunday for dinner and, generally, Tuesday, Wednesday and Thursday evenings for cooking classes. Menus change weekly and special collaborative dinners are planned seasonally. Visit www.heirloomkitchen.com to view schedules for classes as well as current menus. Reservations are required, and tables book early. Heirloom is a BYOB, but offers a small selection of wines from Domenica Winery for purchase on site.