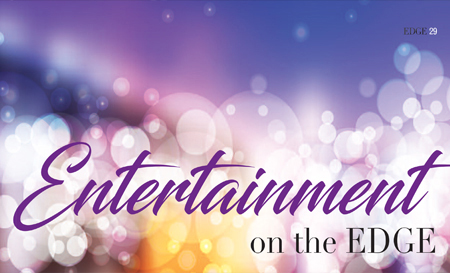 The winner of the Best 2018 Tour at both the Latin Grammys and American Music Awards, Luis Miguel has sold more than 100 million albums. He won his first Grammy as a teenager for a duet with Sheena Easton, becoming the youngest male Grammy winner at the age of 14.

The iconic Latin duo is on its first U.S. Tour since 2013, which includes a spring stop at The Rock. To this day, they are the first Reggaeton artists to win a Grammy. Their 2018 album The Big Leagues has become a huge hit.

Dress in white and dance the night away to old-school jams from the 70s and 80s in support of the R&B Music Museum.

Prudential Center New Kids On the Block The Mixtape Tour

The iconic boy band, now in their 40s, will be joined on stage by special guests Salt-N-Pepa, Tiffany, Debbie Gibson and Naughty By Nature. The group has been touring on and off for a decade after breaking up for 13 years, and was a hit last New Year’s Eve on Times Square.

State Theatre George Takei Where No Story Has Gone Before

The former Star Trek star invites his audience to join him on a personal journey that includes a Japanese internment camp, an iconic role on a legendary series, and a second career as a social media star and advocate for justice.

The Emmy-winning spiritual teacher and life coach brings her life-altering solo event to Prudential Hall in celebration of the 25th anniversary of her best-selling book, Acts of Faith.

Legendary coach Diana Williams of the popular Lifetime series Bring It! comes to Prudential Hall this summer with an eye-popping hip-hop majorette competition. And yes, the audience gets to vote for the winners.

Mendes was originally scheduled for one night at The Rock, but recently added a second date. The Canadian singer/model is an international sensation and last was included among Time Magazine’s 100 Most Influential People In the World.

This is it, they claim. After 45 years of recording the iconic band is calling it a career and mounting one last tour. Kiss pioneered in the over-the-top hard rock stage show and has sold over 100 million records.

The YouTube sensations come to New Brunswick with an innovative mix of classical and pop music. All eight of their albums have topped the Billboard New Age chart.

The iconic boy band is on its biggest arena tour in more than a decade in support of their new 2019 album DNA. The record has already spun off three hits, including “Don’t Go Breaking My Heart.”

The celebrated folk singer recorded the 18-minute Alice’s Restaurant in 1967 at the age of 19. The performance opens with Arlo’s daughter, singer-songwriter Sarah Lee Guthrie.

Paper Mill Playhouse Beauty and the Beast The Broadway Musical

A gorgeous production, based on the Academy Award–winning animated movie, featuring stunning costumes and sets, spectacular dance numbers, and, of course, a fairy-tale ending. Check website for dates and times.

The Nickelodeon and YouTube personality—and former Dance Moms star—makes two stops in our area on her 2018–19 tour.