“DaPesca brings honor to New Jersey’s fishes and fishing industry and fills a void in fine dining…created by restaurateurs and chefs who have failed to place local fishes on a proper pedestal.”

Set back from the main drag of Morristown is the old Vail Mansion, a formidable structure that could, and once did, house any number of governmental offices in this, the county seat of Morris. Instead, it is home to four distinctive eating-and drinking entities that have, under its reinvention as Jockey Hollow Bar & Kitchen, become the dining-out headquarters in north-of-the-Raritan New Jersey for the tuned-in, private jet, chef’s-on-a-night-off, wine geek and raw-bar-loving sets. Translation: It’s the high-style crowd’s home away from home.

Christopher Cannon, late of the New York City restaurant scene, where he won James Beard Awards for Marea and L’Impero, came to New Jersey by way of marriage. Becky, his wife, grew up in North Jersey and knew it was ready for a visionary. Chris Cannon is a visionary. 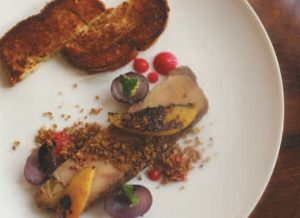 For a time, Cannon was a visionary without a place to practice his progressive restaurant ways. A bitter divorce from his New York restaurant partners left him without dining rooms and bars to pour the artisan, quirky, impossible-to-find wines he was known for—and without a constant stream of fans looking to partake in the latest “Cannonball” blind wine-tastings. So the Cannons and their kids moved to Becky’s home state, and Chris Cannon started looking around for the perfect place to create a public space. Hey, why not a circa-1917 mansion on South Street in Morristown? What might intimidate most only inspires an industry veteran who appears to live by the motto, “If something’s easy, how can it be fun?”

Three years ago, Jockey Hollow became The Oyster Bar, which rocks nearly nonstop with pristine raw fishes, charcuterie, and plates small and large; The Vail Bar, a speakeasy-style hideaway where the go-getters and the glamorous convene over cocktails and fine fare; the Rathskeller, the basement beer hall-private events space that used to serve as Morristown’s very own jail and now hauls ‘em in for live music and top-tier craft brews to wash down German grub; and, upstairs, a somehow-intimate 70-seat fine-dining space. 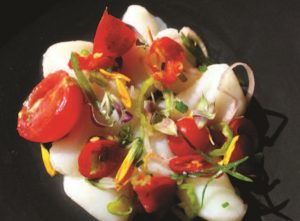 You can explore the bars at your leisure. Right now, we’re talking about that upstairs restaurant-within-a-restaurant that the father of reinvention himself reimagined this winter as DaPesca.

DaPesca brings honor to New Jersey’s fishes and fishing industry and fills a void in fine dining that, inexplicably, in our state bordered by 130 miles of ocean, not to mention rivers and bays and myriad and many lakes has been created by restaurateurs and chefs who have failed to place local fishes on a proper pedestal. Cannon was bothered by this. Having recently acquired a chef as formidable as the mansion turned- restaurant itself—Craig Polignano, ex-Ryland Inn, among other high-end restaurants—to take charge of all things food at Jockey Hollow, and having developed an association with Eric Morris, founder and owner of Local 130, the New Jersey seafood specialist, Cannon was ready to shame the gun-shy of the Garden State. DaPesca does just that.

Sourcing primarily from Local 130, as well as Forty North Oysters, the Barnegat Oyster Collective and Sona-Far Hills Seafood, DaPesca names on its ever-changing menus the boats and their captains who fish off our coastlines and make possible what Polignano and his kitchen crew create. 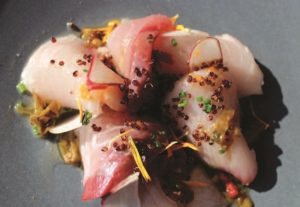 If you eat at DaPesca regularly, captains such as Jim Lovgren and Eric Myklebust might become your guidestars for how to order.

There really is no better way.

For the Barnegat clams, sparked by a wispy ring of Calabrian chile, and the local oysters, with their slurpy salinity and ping of minerality, pave the way to a Spanish mackerel crudo set atop a tangle of cucumber strands spliced with puffed rice and scented with the penetrating power of yuzu. That intense citrus tames the mackerel, probably my favorite fish on the planet, and infuses the toasty puffed rice scattered about with unexpected freshness. The dish shows how inspiration can take hold. You’ll find the calamari á la plancha a revelation, especially if you’ve been eating the same-old, same-old renditions for a generation or so. Here, the local stuff isn’t fried and sent out to pasture with tomato sauce, but given an Asian twist with tamarind and noodles of papaya, Balinese peppers, and peanuts that act as so much more than a give-away garnish. I learned something new about calamari’s versatility in every bite. Our local tuna, too, took a spiritual trip to the Far East when Polignano chose to plate it in a pho-style broth scented with Thai basil and popping with crunchy sprouted mung beans. Polignano and Cannon readily admit pledging allegiance to the flag of Italy, culinary religion in New Jersey, after all. Which brings us to the pasta-risotto portion of the menu: Don’t pass by the “little hats” of pasta—cappellacci stuffed with nuggets of braised pork—that are set in a rich shellfish broth with little clams spurting big juices. Those curious counterpoints to the clam-pork duet? Beech mushrooms. They sop it all up. Meanwhile, the pinched logs of dostalini stuffed with the buttery-tangy Piedmontese cheese castelrosso take to a saucy combo of orange and puntarella, a hopped-up chicory, along with a side crumble of pistachios; and the risotto is positively daring, what with crab dancing with almost-sweet Meyer lemon and a verdant, rough chop of seaweed pesto working pine nuts not ground into the mix, but left whole and therefore more forceful. You know skate wing, right? Well, be prepared for something completely different here, as Polignano turns it on its ear. It’s twirled into something that looks like a mini muffin and partnered not just with the classic caper-butter duo, but with an Italianate twist of roasted cauliflower and grapes. This silky-textured, mild fish always tastes ever so slightly nutty to me. Well, darned if the chef doesn’t give his skate a flourish of hazelnuts at the finish. Bingo. Dayboat scallops are done simply and right here, with a slaw-like base of celery root and apple, cubes of potato and mysterious notes of black truffle that appear when least expected. The best lobster dish I’ve ever had in New Jersey is Polignano’s butter-poached lobster, which yins against the yang of translucent curls of fennel and threads of tarragon. But it’s the frothy bouillabaisse cream that did me in: How boffo is the rich-on-rich marriage of lobster and shellfish bubbles?

Not everything at DaPesca is divinity of the sea. I don’t get the need to wrap monkfish in prosciutto like the minions do, especially when sidemen include olives and sausage that only add to the oversalted taste of the dish. I also hope the squid ink gnocchi, with more squid on the plate, is nixed by now since it was mushy in texture and muddy of flavor. Desserts, too, need work: I’m not a fan of oversize anything, but the two cubes of lackluster carrot cake with a two-bite torpedo of mascarpone ice cream ain’t worth $4, let alone $14, and the trio of sorbets—blood orange, cranberry, and Meyer lemon—had awkward shards of ice within.

Next time, I’ll nab another round of the butter-poached lobster and see if I can get an extra bowl of that bouillabaisse froth. I’ll bring fish-shunners to sit at my table so I can order extras of the calamari and skate and mackerel and dive into their plates without competition. I’ve been looking for a big-ticket seafood joint like this for decades. DaPesca is where my odyssey ends.

Chris Cannon may be over-the-moon about Jersey’s fishes, a fanatic about forging relationships with Garden State farmers and fascinated with the history of his newly adopted state, but there’s nothing more he loves than wine. Unless it’s the collection of eyeglass frames he’s amassed with a fervor that could be described as manic. But that’s a story for another issue of Edge. Cannon has the most idiosyncratically desirable wine list I know, a list that you’re given to scan on an iPad as you are seated, but really deserves a conducted class by itself on a day when Jockey Hollow is otherwise closed. Think a library-style, hushed opportunity to sit and read, and re-read a list that seems like it cannot be real. But it’s a list he’s been working on most of his adult life, establishing connections with importers, distributors, and winemakers, forging relationships with wine names major and utterly obscure. Frankly, Cannon’s tastes tilt to the obscure.

But his prices lean friendly. The centerpiece of his wine program is an evolving, always-changing list of “60 Under $60.” It’s a treasure trove of wines you never thought you’d be able to try, of grapes you’ve never heard of from winemaking regions that have no beaten paths, of styles that will teach you how to pair wine with food once and for all. Cannon and his floor crew love talking wine at the table with their guests, and they love sharing their latest finds. If you’re so inclined, give a call to arrange a “Cannonball” wine adventure, in which the wine maestro himself will pour—blind—wines largely from this “60 Under $60” list and guide you through the tasting. The Cannonball experience takes place on Fridays.

No matter where you dine at Jockey Hollow, you can take advantage of New Jersey’s best wine list.

Reservations accepted and recommended; major credit cards. Open for dinner Tuesday and Wednesday from 5 to 9 p.m., Thursday from 5 to 9:30 p.m., Friday and Saturday from5 to 10:30 p.m. A four-course tasting menu is $86, while a seasonal six-course tasting to be ordered by the entire table is $116. (With wine pairings, the six-course menu is $190.)

A la carte service is available at DaPesca except on Saturdays when only the tasting menus are served. For more information, visit www.jockeyhollowbarandkitchen.com.