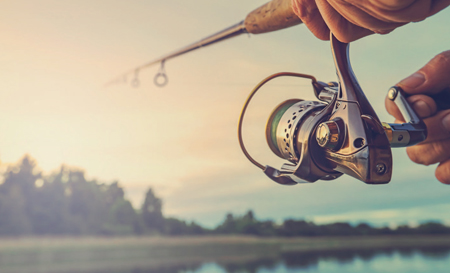 One of the most closely held secrets in the world of fishing is that that good fiction on the sport is harder to hook than an Apache Trout. Let’s see…there’s Melville and Hemingway and…yeah, it’s kind of a short list. Whether you’re shopping for yourself or the angler in your life, these books should be at the top of your list.

A retired Wall Street mogul uses a fishing trip to help his troubled grandson. The author is a fly fishing and open-water fishing expert who also happens to be the head of the Rich Products food company. Proceeds from books sales go to support wounded veterans as part of Project Healing Waters.

This one is for younger anglers. A daylong father-son-and-daughter fishing trip unfolds in a novel structured as a series of poems. Fun line drawings and a “poet’s tackle box” at the end of the book are charming bonuses.

As the cover screams, this book is part of the popular Frank Murdoch series. Weston’s action hero, a former CIA assassin, tangles with a Korean mob boss and must employ his skills as a Bering Sea crabber to survive. The author spent many years as a commercial fisherman.

Who knew that big-money bass fishing contests had a dark and deadly underbelly? Hiaasen’s hero R.J. Decker learns the hard way, with help from a half-blind hermit with a taste for fresh road kill. Yikes!

A fishing tale wrapped in a coming of age story, The River Why follows the travels of Gus Orviston, who develops a new appreciation for the environment and passion for life. Duncan’s novel is regarded as one of the generation’s best books about the American West.

The Old Man and the Sea

Was the movie, which earned Spencer Tracy an Oscar nomination, better than the book? What heresy! The story of an aging Cuban fisherman in an epic battle with a marlin was the last big novel published during Hemingway’s lifetime and won him a Pulitzer Prize.

Inspired by Melville’s whaling voyage in his early 20s, Moby-Dick endures as the greatest fishing story ever told. Not bad for a book that bombed during the author’s lifetime. It’s also an imaginatively constructed study of good and evil, cultural diversity and the existence of God, along with copious amounts of detail on whaling and sailing. The percentage of middle school students who claim to have read this book in its entirety—but who actually skipped over the “boring” chapters—will never be known. English teachers usually guess one or two kids per classroom make it cover to cover.