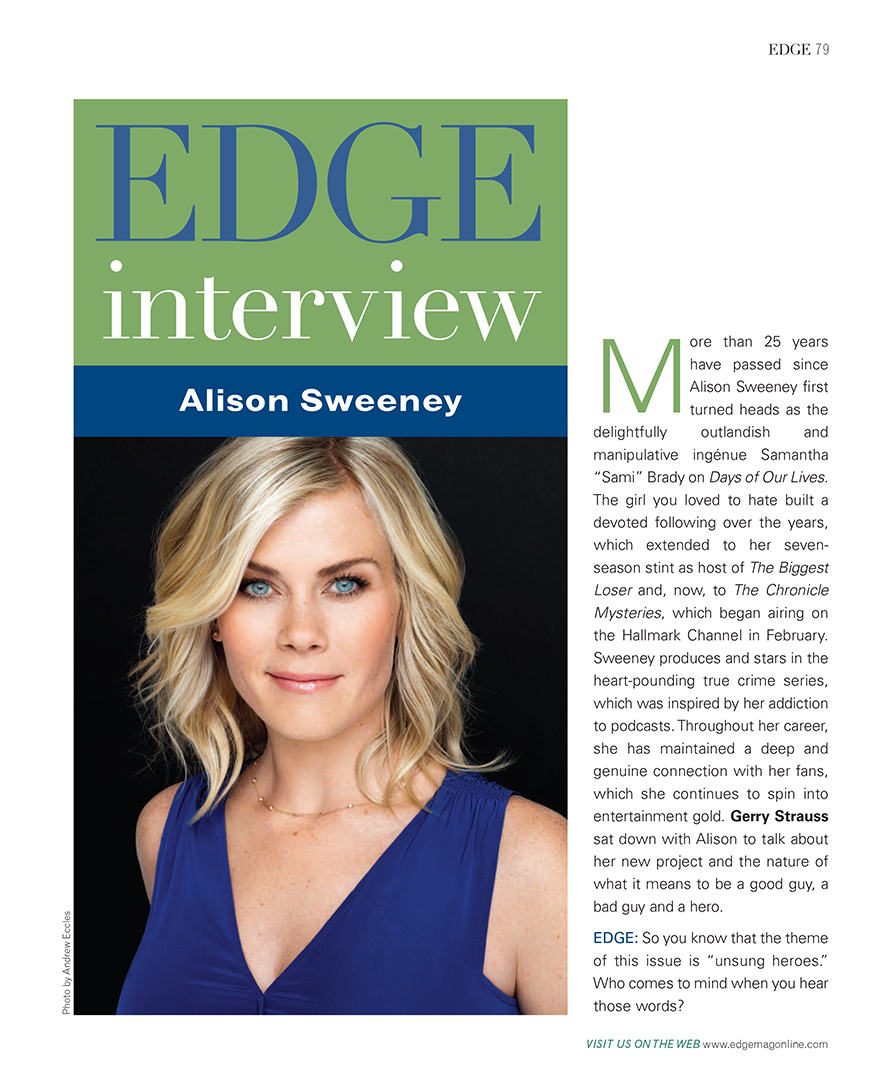 More than 25 years have passed since Alison Sweeney first turned heads as the delightfully outlandish and manipulative ingénue Samantha “Sami” Brady on Days of Our Lives. The girl you loved to hate built a devoted following over the years, which extended to her seven-season stint as host of The Biggest Loser and, now, to The Chronicle Mysteries, which began airing on the Hallmark Channel in February. Sweeney produces and stars in the heart-pounding true crime series, which was inspired by her addiction to podcasts. Throughout her career, she has maintained a deep and genuine connection with her fans, which she continues to spin into entertainment gold. Gerry Strauss sat down with Alison to talk about her new project and the nature of what it means to be a good guy, a bad guy and a hero.

EDGE: So you know that the theme of this issue is “unsung heroes.” Who comes to mind when you hear those words?

AS: It’s hard not to think of the incredibly brave, hard-working firefighters, police, and all the first responders who helped battle the major wildfires in California in 2018. There are so many heartwarming stories of heroism and courage that came from each department. I am so proud and grateful for the work my husband, who is a CHP officer, and his colleagues do, and their constant selflessness in protecting others, as well as their commitment to their jobs. They are all heroes to me.

EDGE: Did the experiences of the contestants on The Biggest Loser strike you as being heroic?

AS: It was so inspiring for me to get to know them, to hear their personal stories and to see their efforts to rise above whatever was standing in their way and to overcome obstacles as they made significant changes to their lives. It was something different for everyone, but to not give up and to keep fighting? That’s heroic. Also, I’ve had the opportunity to work with several different charitable organizations, including hosting the MDA telethon. It was a gift to meet so many incredibly brave young people battling Muscular Dystrophy. They’re not just heroes for continuing to fight and stay strong in the face of such an overwhelming disease. They’re heroic because every patient I met still had hope and love and generosity in their heart for others.

EDGE: On Days of Our Lives, you were a superb antihero.

AS: What a lovely compliment [laughs] thank you! I am eternally grateful for the role of Sami and her misadventures.

EDGE: How much fun is it to play bad guys?

AS: I loved all of Sami’s schemes and machinations. It was always so fun to play as an actress, especially when she got caught. Those were always the best scenes.

EDGE: Does it seem strange to you now to have grown up, both as a person and an actress, on a daytime drama?

AS: Since I started at such a young age, I didn’t know anything else. I grew up having a relatively normal childhood, but then I went to work and played Sami, whose life was far from normal. I never confused my real life story with Sami’s, but it does feel as though I lived through both. In a way, I’m lucky. Just think of all the outrageous personal mistakes I got to experience vicariously through Sami [laughs] rather than making them in my real life!

EDGE: Whom did you look up to in your early soap days?

AS: Certainly, I always looked up to Deidre Hall and Drake Hogestyn through the years at Days because I was lucky to work with them a lot when I first started. It was like going to Daytime Drama University because I learned the ropes from the best. In turn, I’ve taken the opportunity to share what I know with younger actors—when they are open to it. Frankly, that’s not as common a trait anymore.

EDGE: How has social media changed the soap opera world since you became a daytime star in the 1990s?

AS: I remember joining the “World Wide Web” when soap chat rooms were first becoming a thing. I quickly found myself hooked on the instant feedback from fans. Sami always took a lot of criticism [laughs], but when she finally found herself some legitimate romantic love interests—instead of stealing someone else’s—I found the “shippers” online to be incredibly helpful. The actors that I worked with and I, we loved interacting with the fans and reading their reactions to a specific scene or cute subtle moment on camera. The fans notice everything. They appreciate the details. And they don’t forget anything. Ever. [laughs] Those are huge lessons I take with me to work every day, in whatever it is I’m doing.

EDGE: At what point did you decide that you wanted to be more than strictly a performer?

AS: I think the “producer” in me has always been there, below the surface, screaming to get out. Most people who’ve known me were not surprised at all when I announced I was developing and producing my own projects for Hallmark.

EDGE: What aspect of overseeing a project appeals to you?

AS: It’s not that I am a control freak, but I like to be a part of all the details. I love every department that contributes to making the movie the best it can be. Mostly, I love being able to choose to work with people who love it as much as I do. That is truly a blessing.

EDGE: Where did the idea for The Chronicle Mysteries come from?

AS: I am obsessed with the true crime genre— podcasts in particular. Like most people, the first season of Serial by This American Life captured my interest and I haven’t considered climbing out of the rabbit hole. There was one podcast I was listening to where the female journalist was interviewing some dodgy suspects and I thought, She’s really out there in real life, in danger. In that moment, I realized this could be a great scripted mystery series. Podcasting is a great premise because the technology is so good these days that people can really relate to it, and it’s so open that my character, Alex, could really take the podcast into any story that interests her. I think there’s a lot of potential for this…no limits!

EDGE: Has producing the series been easier, harder or different than you imagined?

AS: This is the hardest, most comprehensive project I’ve been a part of. As I mentioned, I’m so appreciative of my colleagues who are as passionate about it as I am. It’s important to me to keep challenging myself with new goals. I consider myself a storyteller, and the feedback from the viewers on the stories is so valuable to me—it makes it all worthwhile. Melissa Salmons, whom I met while she was writing at Days, is a fantastic writer and, thankfully, I got her hooked on true crime, too. We spend endless hours coming up with ideas for the episodes, the crimes, the suspects—everything. Honestly, I hope the police never have cause to look at my search history [laughs]. But seriously, there is intensity to this concept that is bigger than anything else I’ve done. I’m lucky because a lot of it can be done after I drop my kids off at school, and before soccer practice is over.

EDGE: Since you brought it up, how does a project like this fit onto your plate?

AS: I hope I continue to have the opportunity to push myself creatively, while still being the best wife and mom I know how to be. Sometimes I forget that I left the stove on and burn dinner, but the kids get to see my husband and me supporting each other, every day, through it all. To me, that’s the best role modeling we can do.