While other charitable groups are devoted to raising money, HFNJ focuses on how best to spend it.

The Healthcare Foundation of New Jersey (HFNJ) has been a nurturing force in the greater Newark, NJ area and the Jewish community of MetroWest since 1996, when it was formed from the sale of Newark Beth Israel Medical Center to the Saint Barnabas Corporation. As a champion donor to Trinitas, the HFNJ’s extreme generosity to the hospital dates back to 2000, totaling 21 grants to the rather significant tune of $3,374,132.

According to Marsha I. Atkind, Executive Director/CEO, the HFNJ functions a bit differently than one might expect. Rather than working to raise funds, the board plays an active role in making decisions about applicants’ proposals and projects. 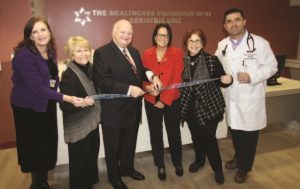 “We have a strong endowment,” says Atkind, a University of Pennsylvania graduate, who studied at Columbia University Law School. “(The late) Lester Lieberman, our founding chairman, was the chair at Newark Beth Israel when the sale took place. He made that sale happen and his vision made the HFNJ happen. We owe everything to him.”

At one time a stay-home mother, Atkind got involved in women’s issues and became President of the National Council of Jewish Women in 2002. When her term was up, she was hired by the Jewish Federation of MetroWest to start a women’s foundation. In 2008, she was recruited to the HFNJ.

“In our 21-year history, we’ve given away about $135 million dollars, the lion share in greater Newark,” remarks Atkind. “We fund everything from major pieces of equipment, as we’ve done for Trinitas in the Emergency Department, to programs at grassroots agencies that help people improve their health and wellness.”

As needs arise, Nadine Brechner, Vice President/Chief Development Officer at Trinitas, remains grateful that the HFNJ’s generosity doesn’t begin and end with money. Trustees and staff spend their time working closely with applicants to get to know the challenges of their goals and how to best meet them, which sometimes means reshaping and improving proposals.

“Marsha, her staff and trustees are all fantastic,” says Brechner, who works closely with them on projects from start to finish. “They have taken an active interest in our patients and visit frequently. Whenever I’ve gone to them with our needs—both big and small—they’ve always found a way to help. They also question our proposals. And they follow up because they want to know that they have truly helped. They are true partners.”

An example is the new Gary S. Horan Emergency Department at Trinitas, a 24,000-square-foot renovation that nearly doubled the amount of beds and created separate treatment areas for the consideration of seniors, families and behavioral health patients.

“Their gifts have literally touched almost every aspect of care at Trinitas, which is why the HFNJ will be honored at the 2018 Peace of Mind Gala this year,” says Brechner. 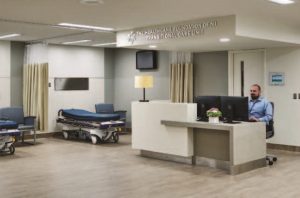 By definition, the HFNJ’s mission is to improve the health and well-being of vulnerable, underserved populations in greater Newark and the Jewish Community of MetroWest NJ, to elevate the quality of community healthcare, reduce disparities in access, and promote the infusion of compassion and humanism into our healthcare system. Dr. Beth Levithan, chair of the HFNJ, who joined the board in 1997, is most proud of the HFNJ’s commitment to humanism. 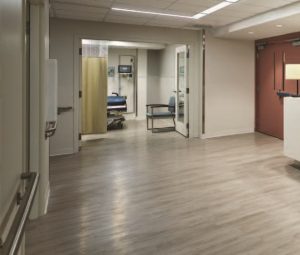 “There is a focus on humanism in every grant we fund and everything we do,” says Levithan, the former adjunct professor at the Rutgers School of Social Work in New Brunswick, and senior researcher/evaluator at the Research Center at John Jay College of Criminal Justice in New York.

“Les was passionate about inspiring our Board with that mission. He always emphasized treating people, not their diseases, as the key to successful healing and wellness. The Healthcare Foundation of NJ Center for Humanism and Medicine, which was founded and funded by HFNJ at Rutgers New Jersey Medical School in 2004, is only one example of this emphasis.” 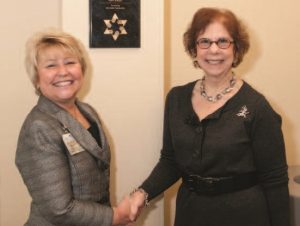 Arnold and Sandra Gold of the Arnold P. Gold Foundation were a pivotal influence on Lieberman and the HFNJ. “The most wonderful evening of the year for HFNJ is when we give out the Lester Z. Lieberman Humanism in Healthcare Awards to individuals nominated by our grantees as excellent examples of humanistic caregivers,” she adds. “Les and Arnold Gold are now deceased, but they would be so pleased to know their work will continue at HFNJ reaching the most vulnerable populations they both wanted to serve.”

The HFNJ was one of the early champions of HIV-AIDS programs and has prioritized projects aimed at early development, disabilities, and parenting. One of HFNJ’s biggest successes is Mom2Mom, a telephone peer support program run by Rutgers University Behavioral Health designed to have mothers of children with disabilities answer questions posed by other mothers with similar issues. Mom2Mom began locally and has now grown to serve mothers throughout the US.

“Some of the work we’ve done has been to help mothers bond with their infants and be the best parents they can be,” says Atkind. “We feel so strongly that if children start off on the right foot, a lot of the problems later in life could be alleviated or possibly eliminated. We know how hard it is to raise children, especially in today’s world with all the responsibilities and issues brought on by poverty, racial and cultural disparities, and technology. Programs that support mothers and teachers are crucial to the health of our country moving forward.”

Women, in general, can be grateful for the HFNJ’s most recent pledge for the new Connie Dwyer Breast Center to pay for the Hologic Selenia 3D Mammography System, the latest technology for detecting invasive cancers.

“HFNJ initially helped us update our technology when we went from film to digital imaging,” says Brechner. “They care about our moms and have been caring for them fora long time.”

THE HEALTHCARE FOUNDATION OF NEW JERSEY HAS SUPPORTED TRINITAS WITH THE FOLLOWING GRANTS:

Most recently, a $348,467 grant will cover the balance needed for a Hologic Selenia 3D Mammography System for the New Connie Dwyer Breast Center. This system will be the centerpiece of the new Center. Now the industry standard, 3D mammography technology, can detect 41% more invasive cancers than older methods while reducing false positives by 40%. With this grant, Trinitas will be able to provide the highest quality, potentially lifesaving diagnostic care to the underserved women of the region.

These are among the latest and largest gifts they have given to Trinitas. In all, HFNJ gave $1.75 million to the Proud Past, Promising Future Campaign with the following components: