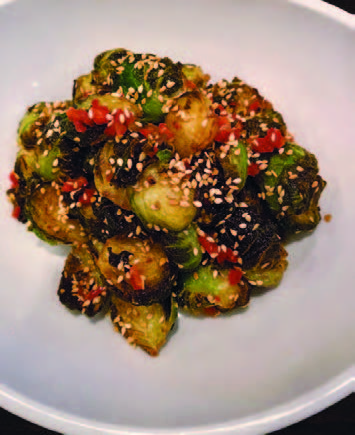 “Do you get the idea that Decker pushes at the edges of possibilities without going too far?”

Rabbit, take two—I’m thinking to myself as I cop a fourth—then a fifth bite of the slow-braised meat, might taste even better than the first time I’d tried it a few weeks earlier—at the reinvented 100 Steps in Cranford. The dish takes in a lot of moisture during its daily slow-cook, and what I taste in every bite of that meat is a concentrated infusion of liquid, seasoning and the kickback of accents: currants, Castelvetrano olives and, in a tip of the hat to the classic French preparation of rabbit in mustard sauce, the playful tang of pickled yellow mustard seeds. I spear a triangle of polenta, crisped by a crusting of parmesan, into the rabbit’s broth and wonder how soon I can get back to 100 Steps to eat, and think more about this dish that I hope will be fending off the cold all season.

It’s executive chef Kara Decker’s rabbit, a signature dish on her new menu at her old stomping grounds. And it’s proof positive that you can go home again. 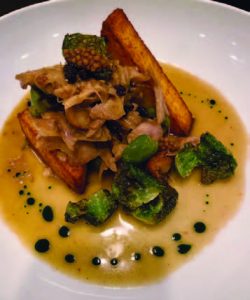 In a Reader’s Digest-style condensed recap, Chef Decker was the go-to gal in the kitchens of A Toute Heure and its spinoff sibling 100 Steps when both were owned and operated by Andrea and Jim Carbine. For years, Decker cooked her heart out at the block-apart restaurants—and won the hearts of locals and destination diners. Flash forward to the Carbines selling the two restaurants to separate owners, new chefs taking charge, and subsequent chef changes.

Then, this past fall, Jack Tagmouti, the new owner of 100 Steps, connected with Decker and brought her back to the kitchen she’d shepherded in its infancy and early childhood. They kept the raw bar, a seminal component that spotlights in-season oysters, while Decker re-focused the menu to hone in on her gutsy, decidedly un-shy dishes that sift through the Mediterranean repertoire until hitting solid gold. 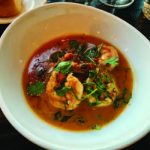 Hence, the rabbit, which Decker labels “Spanish” and I would argue also manages to tap into essential flavors that cooks in Sicily and Provence might bring to the dish. She broadens her vision again in an appetizer that, elsewhere, has become clichéd, by frying pork belly and setting it atop a creamy parsnip puree surrounded by dots of pear puree and then drizzling the pork with a fish-sauce vinaigrette that gives it a briny, caramel-y boost. Hot red Fresno chilies and mint, a nifty two-step, finish this Euro-Asian number, which also came with a tangle of gently pickled onions, which I demolished before handing it off to my too-polite guests.

Do you get the idea that Decker pushes at the edges of possibilities without going too far? Goes for forward flavors that don’t fight with each other for attention on her plates, but complement and flatter each other? Works, and works hard, at guiding her diners to new ways of looking at familiar foods? She does all of that in her rendition of grilled octopus: Smoky-to-the max with an emulsified pimenton vinaigrette, the soft-bodied cephalopod tangos with an escabeche of endive and black kalamata olive oil, adding smacks of acidity and salinity to each bite. What else is needed? Potatoes, of course, the traditional sideshow to octopus, and a component that, here, proves a perfect mate to that soulful Spanish paprika in the vinaigrette that is the foundation of this dish. 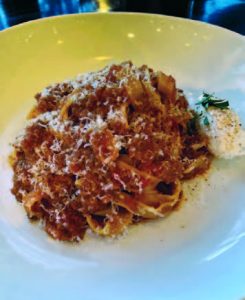 Impressive are Decker’s pastas, which don’t employ shapes you only find in Italy or sauces that seem borne in uncharted territory. There’s a tagliatelle Bolognese, chunky with multiple cuts of pork and beef, warmed by a subtle shake of nutmeg, and topped by both a scoop of house-made ricotta and a dusting of Parmigiano-Reggiano. There’s orecchiette that snuggles up to cubes of butternut squash and strips of Lacinato kale before being sucker-punched by Decker’s own heat-charged chorizo—a surprise that you have to assume would overpower the little ears, sweet-nutty squash, and sweet-delicate kale. Nope; crumbled, but left chunky enough to collaborate in a fine bite with the squash, and/or kale, and/or pasta, the chorizo revs up a plate that could be sleepy or (maybe) calm. I like excitement. 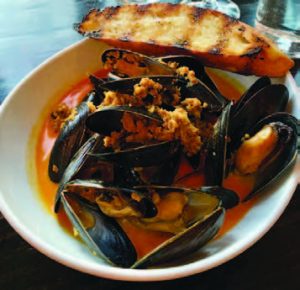 That same pizzazz is brought to Kara’s Mussel Pot, the genre she made famous in our state at A Toute Heure and again at the original 100 Steps. She built late autumn’s pot around meaty mussels and knuckle-size nuggets of chorizo, then tamed the sausage’s heat a tad by lacing a garlic cream sauce with saffron, mild Dijon mustard and skinny slivers of caramelized shallots. You’ll be given a spoon and you should use it to scoop up chorizo and mussels and sauce all at once. If you remember the Parker House rolls that were all the rage at the old A Toute Heure and 100 Steps, they’re here; though the mussel pots are served with crostini, I see no reason not to use the rolls as sop-up agents to that crazy-delicious cream sauce. Baby food? Maybe. But I loved it.

I’m batting clean-up here with Decker’s fish dishes, but they’re hardly also-rans. One night, there was a black bass special, the fillet keeping its skin on and super-crisped as a counterpoint to the buttery mashed potatoes and the sultry roasted tomato coulis underneath. Another night, there was skate wing, looking downright gorgeous splayed atop white beans—punctuated by nibs of carrots, onions, and herbs, and topped with a taut kind of pesto dominated by green olives. Those meaty olives brought structure to the silky fish/ultra-creamy bean combo, but what made the dish a standout was a generous crown of toasted bread crumbs. Let me swap out “crown” for “tiara.” That’s a better fit. 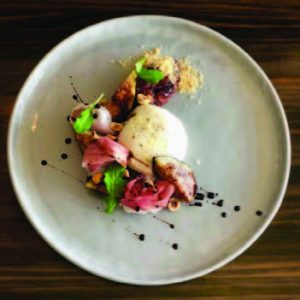 Though the desserts at 100 Steps are well made, I was wishing for something citrusy or more fruit-focused in the lineup. That isn’t to say I didn’t cotton to the apple tartlet, with its admirably shortcrust, almond-infused cream filling and cleverly shaped cookie-like lid shielding the slices of apple, but this one’s about pastry, not fruit. A swell dome of chocolate sabayon fortified with chocolate dacquoise also benefits from that short dough base and gets a lift from a bright raspberry coulis. There was lots of oohing and ahhing at my table over the confection called The Colombian, a layering of chocolate mousse and dulce de leche interspersed with layers of chocolate dacquoise and encased in chocolate coating. I know… I’m a minority voter as a fruit-for-dessert lover.

But I love Kara Decker’s cooking, and I love this new version of 100 Steps. I love the fact that this chef is unabashedly bold about flavor and constantly experiments, tweaking dishes from her past and trying out ingredients novel and even unexpected. I love the fact that, in defiance of custom, the reinvention of this restaurant doesn’t rely on pure nostalgia, but rather on fortifying its strengths and powering forward.

Major credit cards and reservations accepted. BYOB. Open for dinner and happy hour Wednesday through Sunday. Though 100 Steps does not have a liquor license, diners bring their own libations during happy hour, which starts at 4 p.m. and at which raw bar and menu items are served. Proprietor Jack Tagmouti and his team—including executive chef Kara Decker and manager/events director Rick Sue-Poi— produce private events at the restaurant, host collaborative dinners, and coordinate tastings that range from oysters to artisan foods and farm products.

Editor’s Note: With Chef Decker’s seasonally attuned menus, there are more wine-friendly dishes than ever on tap at 100 Steps. The next time you’re looking for an appropriate BYOB to try out your latest acquisitions, snag a reservation and load up your wine tote.