“The duck mix in the little tacos enjoys a two-step dance with the broccoli pops that escape convention with that hint of chili  in the sesame sauce.”

Route 9 South, Old Bridge, next to the Emporium International Market

I am power-shopping at Emporium International Market, snagging a vacuum-packed, hot-smoked whole mackerel and asking the kindly woman behind the seafood counter to dole out a quarter-pound of caviar, which will cost me $10 and elevate the hors d’oeuvres at my next night’s dinner party from nice-enough to all-luxe. I’ve already had wrapped a pound of peppered slab bacon, which I’m cooking in my mind: Tiny dice, fry, remove bacon-nibs, add a huge amount of greens, sauté, top with the little bacon bits, eat.

I am snapped into the here-and-now by the members of my dine team. We’re booked for dinner at the restaurant next door and it is now post-time for chow time, they remind me. It’s 7:30. The Emporium is open ’til 9:30. I want to get back to ﬁnish my shopping; I feel as though I’ve only just tapped this market on Route 9 in Old Bridge with all manner of Eastern European foods and a distinct Russian accent. But dinner in two hours? Fat chance. 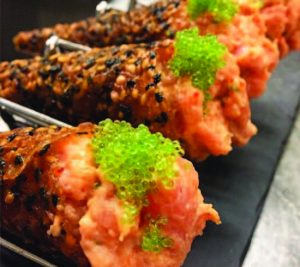 Seven minutes late for our reservation, we spill over into Just, the singularly named spot that shares an address with the Emporium, and apologize profusely to the hostess. “I was shopping,” I start to say as the gal smiles and replies: “No problem. It happens all the time.” I bet it does. The owner of both the market and the restaurant, Igor Maller, is a native of the Ukraine who emigrated to New Jersey and, once upon a time, operated a club in Moscow. International is his way of life. Putting together the one-two punch of a market aimed at adventurous home cooks and a restaurant whose menu runs the global gamut is a no-brainer for the culinary juggernaut: Maller’s vision of geographical borders and boundaries is that they don’t exist. Unite, fuse, take ingredients to their natural conclusions, and prove that even if politicians can’t seem to bring about world peace, the big table of the world proves we all eat many, many of the same things, just in different guises. 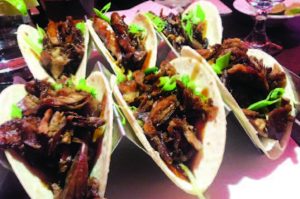 The conductor of Just’s culinary orchestra is chef Jonathan Vukusich, who reins in the far-reaching menu by believing in the taste-good factor. His food is approachable and, often, fun. He elevates comfort foods, street foods, iconic foods to date-night dine-out levels. He cares about deliciousness and design in equal proportions and executes his plates with panache. In the airy dining room that is often ﬁlled to the max, the vibe is merry and bright. It’s a happy scene.

We are happy to embark on a world tour with the starters. There’s a take on Tater Tots stuffed with shrimp, crab and a binder of mozzarella and goat cheeses. There’s a sesame-ﬂecked tuile molded into a cone and ﬁlled with sushi-caliber tuna and wasabi’d tobiko. There are mini soft-shelled tacos plumped with Peking duck and shreds of cucumber and scallions, then swished with a citrusy, slightly sweet hoisin sauce. There’s broccoli fried Korean-style, then splashed with a heat-licked sesame sauce. Funny how the tuna cone, with its now-conventional forward-ﬂavor Japanese accents plays off the soothing taste and texture of the seafood-cheese nuggets; intriguing how the duck mix in the little tacos enjoys a two-step dance with the broccoli pops that escape convention with that hint of chili in the sesame sauce.

The kitchen also has fun with avocados, fashioning them into an Eastern Med-North African salad by torching, then plating them with chickpeas, nutty-tart pickled garlic and a burnt orange vinaigrette that achieves the kitchen’s goal of uniﬁcation: Don’t count out the intrinsic ﬂavor of an everyday orange to ratchet up the tastes of a creamy, mild avocado, earthy chickpeas and good old garlic. For it does…especially in this ﬁred-up incarnation.

One of my personal favorite spices is sumac, the sour-tangy-tart red berry that is picked from a bush in the Middle East, dried and ground into a powder or ﬂaked. Its inherent balance, not to mention vibrant color, makes it a ﬁne choice when lemon won’t do. Here, at Just, sumac powers up shrimp and scallops that are served over couscous ﬂecked with vegetables. A coconut curry sauce infused with tomato takes a shine to Chilean sea bass: The velvety curry is cut by the acid in the tomato, and the result is a balanced accent for the mild, yet rich ﬁsh. Hamachi sashimi, however, is overwhelmed by shiitakes and peppers sautéed in a sauce of coconut and ponzu that’s incongruously sweet. It was wrong for the ﬁsh.

The pork shank special, relatively tame in a brandied mushroom sauce, isn’t one of Just’s top-tier entrees, but the accompanying pork-fried orzo, with its smoky nibs, should be sold by the quart. Short ribs could be partnered with the broccoli app: The meat is slow-roasted in a Korean barbecue sauce and served with a super-smooth puree of potatoes that cozies up to salsify. Tasty stuff. 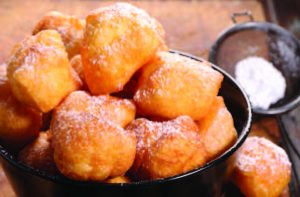 Desserts follow suit here, meaning you’re not going to get simple or plain. An apple tart cosseted in puff pastry is given a condiment of its own in a honey-quince foam. Vanilla ice cream, too. The pastry’s a little thick, a little heavy, but the apple-honey/quince partnership is a natural. What do you get when you layer chocolate fudge, toasted meringue and a graham cracker custard? A S’mores crème brulee. Didn’t you earn that badge on a Scout camping trip, Skippy? You also can face-off with Oreo zeppoles, which you will either love or choose to ignore. The requisite uber-intense chocolate confection is dubbed “Mona Lisa,” and it’s a layered cake of dark chocolate mousse, ganache and whipped cream swirled with raspberry preserves. It’s more obvious that its sly-smile namesake.

As I ﬁgured, we’re at Just way past Emporium International Market’s closing bell. But that’s okay. I leave feeling as though the shopping prelude and the eating opera is exactly what this excursion to a tucked-away world is supposed to be about. 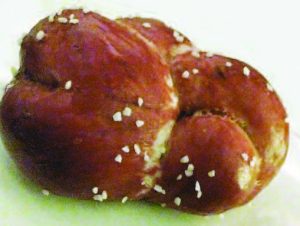 Shortly after you are seated for dinner at Just, you will be served pretzel buns with honey-Dijon mustard butter. These are clever and addictive. The pretzel bun is much like a soft pretzel, and deﬁnitely on the Amish end of the soft pretzel spectrum. The butter, softened and speckled with mustard seeds, isn’t too sweet, but there’s a deﬁnite smack of honey.

You must slather the butter—in my case, in frosting-like proportion—onto the pretzel, eat and repeat. The repeating process is likely to, well, repeat itself.