What is it about northern New Jersey that produces so much show business talent? Is it a numbers game, as some claim, a result of so many people per square mile? Is it the restlessness engendered by urban sprawl, the need to move up and move out? Is it the nighttime skyline of New York City, twinkling in the distance, coaxing our hidden gems across the river? EDGE’s Gerry Strauss sat down with actor Jason Biggs to explore these questions, and to chart his course from child actor to movie franchise star to his most recent turn as a member of the spectacular ensemble cast of the Netflix hit Orange Is the New Black. What’s on the horizon for Biggs? Spoiler alert: It won’t be Guys and Dolls.

EDGE: From a career perspective, was there a benefit to growing up in Hasbrouck Heights, in terms of the proximity to New York? 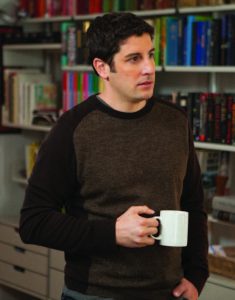 Photo by Linda Kallerus for Netflix.

JB: Without a doubt. In fact, if I had not grown up where I did, it stands to reason that I might never have gotten into show business at all. As it was, it was just eight miles between my house and Times Square. Our patience was tested plenty, fighting the rush hour traffic at the Lincoln Tunnel when I had an after-school audition. But had I lived any further away, I can’t imagine that working and auditioning in the city would have been plausible.

EDGE: Aside from the acting, was your childhood fairly typical?

JB: I played Little League baseball, Pop Warner football, and wrestled with the town recreational team. I rode my bike everywhere, swam in our pool during the humid summers, and shoveled snow for neighbors in the winter. We lived right under the flight paths for both Teterboro and Newark airports, and I would spend countless hours sitting outside, watching and identifying the planes overhead. In fact, I remain obsessed with aviation as an adult.

EDGE: How did acting find its way into the mix?

JB: My older sister, who is six years my senior, was in a dance group as a kid. Some of the other girls in the group started going into the city to try to get agents and attempt acting. My sister wanted to do the same. Our parents, thinking it could be both a fun hobby and a good way to save money for college, supported it and made it happen. When I was five, my sister’s then-manager called my mom and asked if I would want to audition for something. I did, and haven’t stopped since. 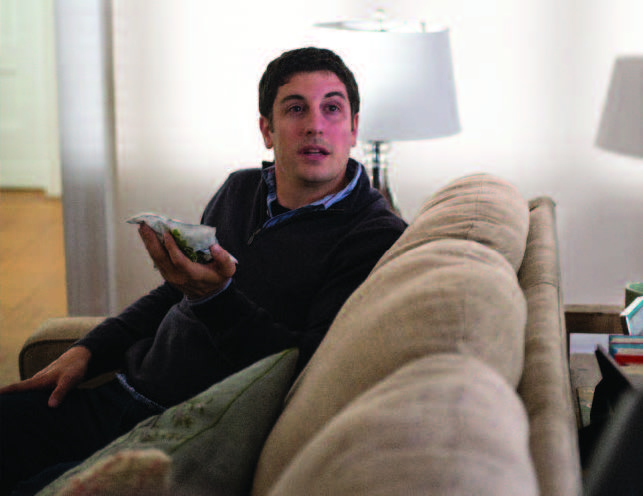 Photo by Ali Goldstein for Netflix.

EDGE: What role did your parents play in your evolution as an actor?

JB: My parents were instrumental in making it possible for me to act as a child. Logistically speaking, there was no way I could have done it without their services as chauffeurs and chaperones. But they never forced it on me—it was always my choice. They were very proud of my accomplishments as a kid, just as they are now.

EDGE: At 14, you were on Broadway with Judd Hirsch and Tony Shaloub in Conversations with My Father, and at 16 you were on As the World Turns. What did you carry forward from those early experiences as an actor?

JB: I like to think that every job I have helps prepare me for the next one. But daytime television certainly had its challenges and gave me important lessons to take into future jobs. For example, the filming schedule in daytime moves at a breakneck speed. As such, you need to be very capable when it comes to quickly and efficiently memorizing all of your lines. You don’t have much time for rehearsal. You really learn to focus and think quickly.

EDGE: You are so well known for the R-rated coming-of-age American Pie films, which continue to have an incredible following. What do you think the movie’s ultimate legacy will be?

JB: Well, it’s obviously somewhat difficult to be objective about something that I am so close to, and that is such an integral part of my life. But based on people’s reactions—and to the constantly changing demographic of the movie’s fans—I believe it will have great staying power. I look forward to helping many future generations of adolescents learn about the birds and the bees!

EDGE: On the flip side, playing the same character in a hit movie with three hit sequels is a risky proposition for anyone who thrives on playing diverse characters.  How important was it for you to pursue roles where people could see you differently than they knew you from American Pie?

JB: I’m always trying to change people’s perception of me, especially since that perception is pretty firmly attached to one role in particular. I know that I am a more complicated and multi-faceted person than I’ve been able to show in my roles, so of course I’m eager to share that. But really, the bigger point in trying to branch out is to keep things exciting for me and to continue to challenge myself by working outside my comfort zone. Ultimately, I’m grateful for any opportunity to work. This is a very fickle industry—one in which it is tough to find success, let alone maintain it.

EDGE: Was it tough to know that the world was basically watching you grow up?

JB: Truthfully, it wasn’t something I was aware of while it was happening. I’m more aware of it now though. Looking back at the footage, I can’t help but be struck by how young I look. It’s been over 15 years since the first American Pie. Of course, I thought I was such an adult then, but I obviously had so much still to learn. 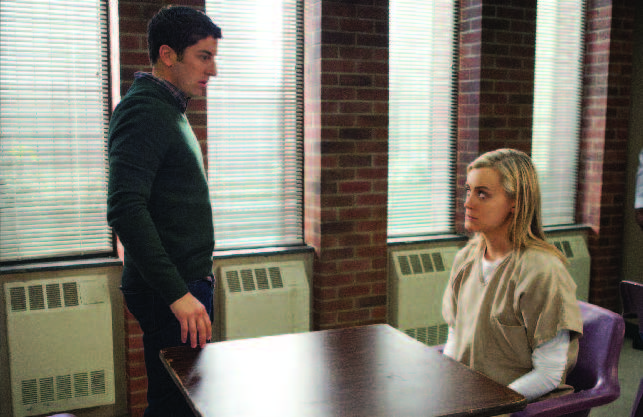 Photo by K.C. Bailey for Netflix.

EDGE: Your body of work is eclectic, to say the least. From drama to comedy to voiceovers to small films. What do you look for in a role?

JB: I look for an opportunity to have fun, to challenge myself, and to work with great people. I’ve been very lucky in my career to have been able to move across different genres and different mediums, and work with people who I can learn a lot from. Ideally, every job will feel like it’s an organic next step in my career, one that will hopefully continue into the future.

EDGE: Your current show, Orange Is The New Black, is unique not just in terms of story and tone, but in the fact that it’s part of the Netflix library of original programming—with no actual presence on traditional broadcast or cable television. It sounds as if that uncharted aspect of the project might have been appealing.

JB: There is no question that a huge part of the appeal of the project was the fact that it would be streaming on Netflix. The entire television landscape has changed dramatically over the last few years. The way people consume their shows and movies is different. And Netflix is at the forefront of the movement to cater to these new demands. I feel like I’m part of something groundbreaking, something cutting-edge. It’s very cool.

EDGE: What’s different about shooting a series that’s released all at once, where people can binge watch or watch on their own schedule?

JB: What makes this model most unique—both because we shoot the whole season in its entirety and it is released in its entirety—is that it makes it more akin to a 13-hour movie, as opposed to a television show. This affects the actors on set and, as you point out, also the audience at home.

EDGE: Your character on the series, Larry Bloom, exists in real life. For you, is it more important to be accurate or entertaining?

JB: The show’s creator, Jenji Kohan, was clear from the beginning that we would be making our own show, one that could stand apart from the book and therefore from the real lives of the characters in it. It’s a necessity, really, since we are making a longer-form version of the original story—and therefore need to expand upon the original, both in storylines and ideas. So there was no real pressure on me to portray Larry in any other way than that which was dictated by the scripts. I never needed to do an “impression,” so to speak.

EDGE: Orange Is The New Black has such a talented ensemble, headed by Taylor Schilling (above left). Is there a hidden gem in the cast, one actor or performance that has really taken you by surprise?

JB: Well, it’s hard to single out one performance. This entire cast is pretty special. But the character of Tiffany “Pennsatucky” Doggett has always been a favorite of mine. Taryn Manning’s portrayal is both hilarious and heartbreaking.

EDGE: What is your own hidden gem? If you could point EDGE readers to one performance you’re particularly proud of, which would it be? 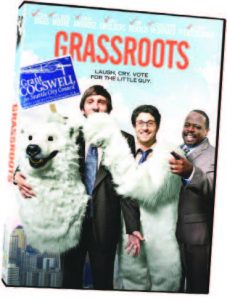 JB: Grassroots is a film and performance I am particularly proud of. Not unlike Orange, it required a more subtle, grounded, and emotionally true performance. It’s a cool little film that represents for me a turn toward choosing more challenging and adult roles.

EDGE: Do you still maintain any connection to your old stomping grounds in Jersey?

JB: Very much so. My parents live in the same house I grew up in. My sister lives in Bogota. I’ve remained friends with a lot of my buddies from high school, some of whom still live in North Jersey as well. I try to get back a couple times a year, and I always make it to at least one Giants game each season. They’ll always be my team, no matter where I might live.

EDGE: What aspect of Jersey life have you clung to?

JB: Well, my dietary habits remain firmly tied to my Italian-American-North-Jersey upbringing. I love cooking pasta for early Sunday dinners, for example. And my accent is likely to make the occasional appearance, especially when I’m having a conversation with one of my family members or friends from home. My wife always points it out when that happens. Fortunately for me, she thinks it’s cute.

EDGE: You’ve done so many things already in your career, but what would you like to do that you’ve never done before?

JB: Tough question. It sounds trite, but I really want to try it all—except for the things I absolutely know for certain I will never be able to do. Like singing. So don’t expect to see me in Guys and Dolls anytime soon. And if you hear that I’m in a production of it, definitely don’t go see it. It will be a waste of your money. It’s good to know your limitations, I suppose. 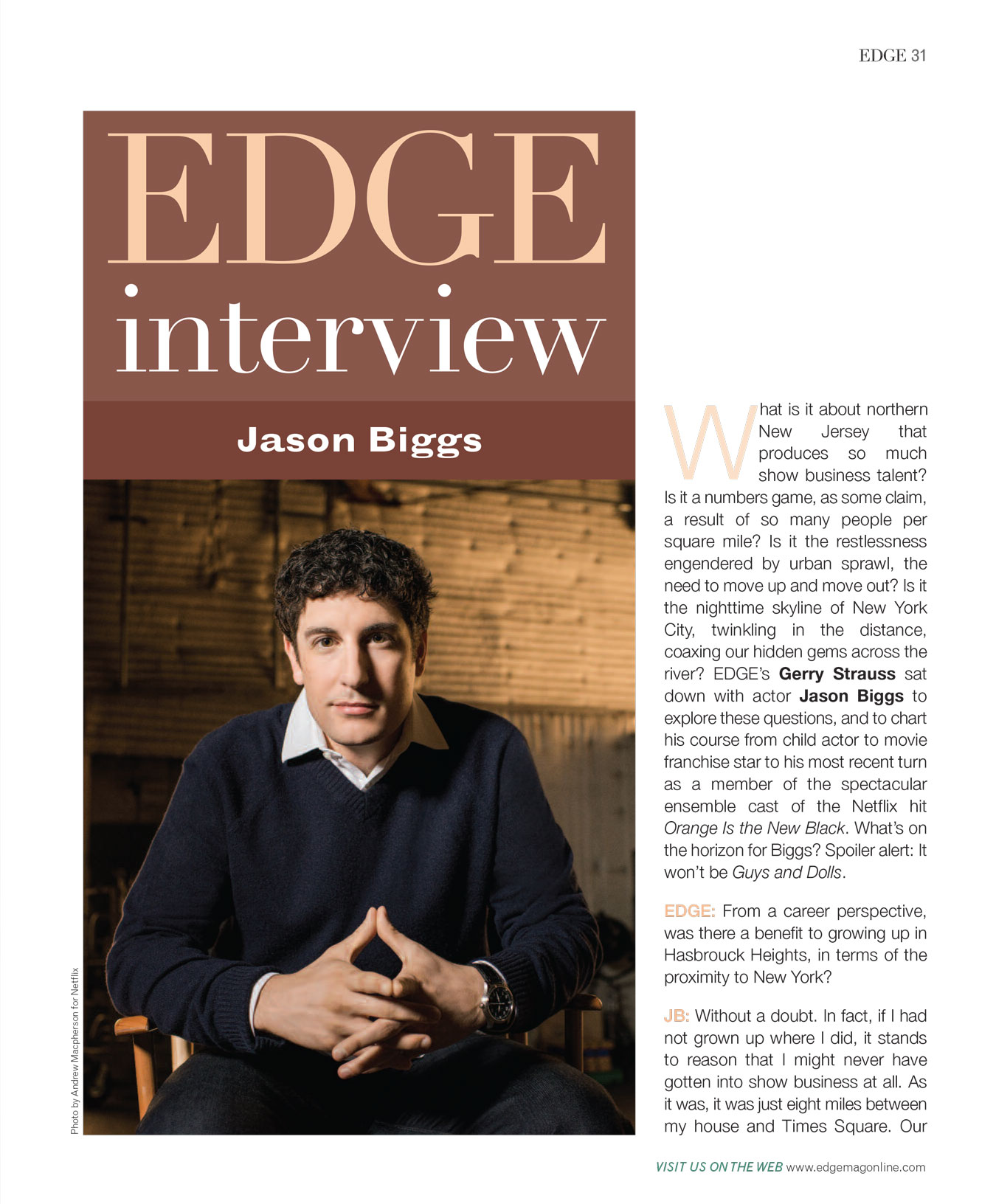