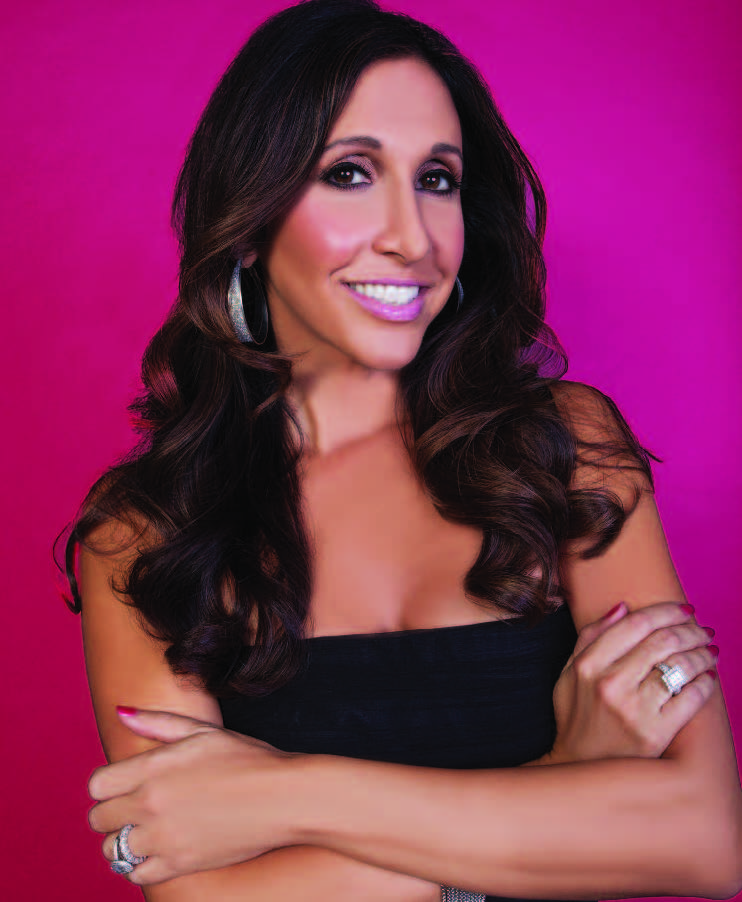 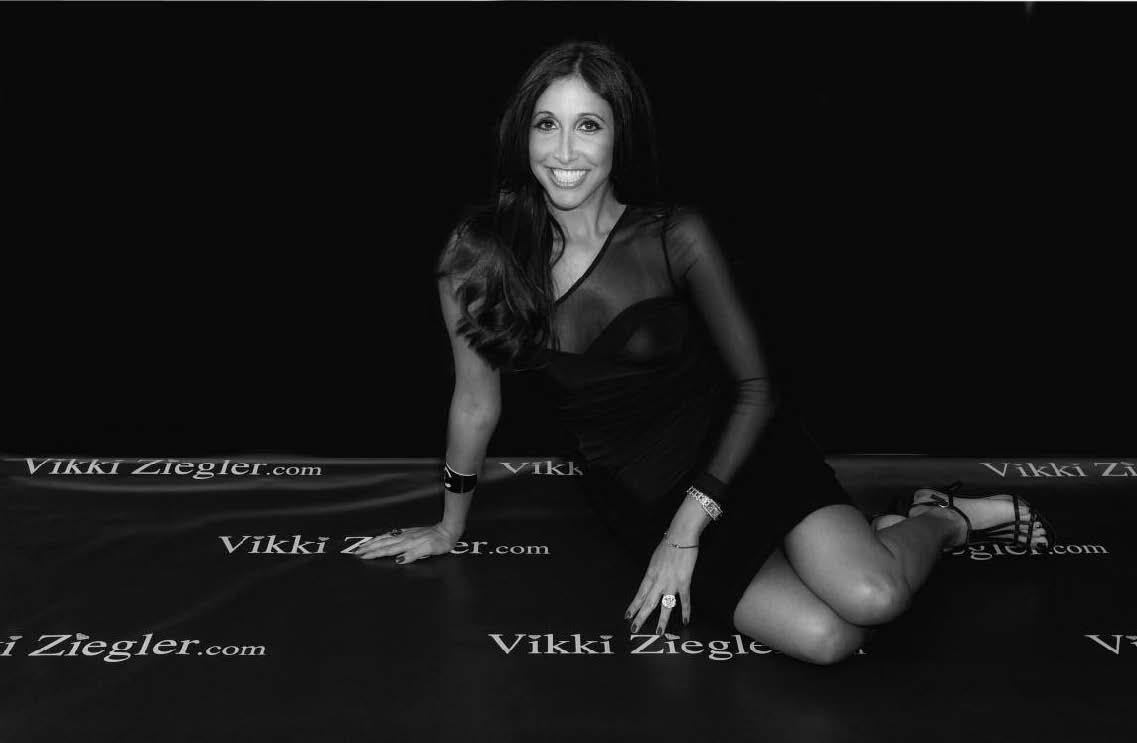 When two people tie the knot, they never know for sure what’s over the horizon. Unfortunately, the outcome of many unions is not always “happily ever after.” As Vikki Ziegler knows all too well, sometimes love turns to hate. Her Livingston, NJ practice (Ziegler & Zemsky) focuses on divorce and mediation—a process designed to save time, money and anguish, and help couples to split and quickly move on. Ziegler’s reputation for finding the middle ground has made her a familiar face to countless millions of television viewers. She is a frequent contributor to network and cable news shows, has authored books and magazine articles about her craft, and founded the web site divorcedating.com. This summer, Ziegler begins work on a reality series for Bravo, which promises to boost her public profile even higher. As EDGE editor Mark Stewart discovered, there’s more to being a divorce mediator than divvying-up assets. Ziegler wears many hats. And sometimes she must change them in the blink of an eye.

EDGE: There are three ways to go in a divorce, is that correct?

Vikki Ziegler: Yes. If you go to court, a judge decides the outcome.

In arbitration, a retired judge or practicing attorney is hired, and lawyers control the discussion. A mediator assists in explaining the law and guiding couples to a resolution.

EDGE: Is part of what you do opening their eyes to how a judge is likely to rule?

VZ: That’s a crucial part. My goal is to show why it’s good to compromise on certain issues. It’s a tough-love process that requires patience and a skillful articulation of the law.

EDGE: If mediation is successful, it’s a win-win financially.

VZ: It is. You only pay the mediator, and can save the exorbitant fees associated with hiring two attorneys. Litigation is the most expensive and least effective method to handle a divorce, in my opinion. You have no control over the outcome, spend a great deal of money during the process, and are generally angry over the results.

EDGE: How does a couple pick a mediator?

VZ: Background. Experience. Referrals. Cost. Sometimes there is a preference for a man or woman. Most couples choose a family law mediator to help them through their divorce. They’re the most seasoned and know the law with specificity. A good mediator advocates for both sides, but also molds the resolution in a compromised fashion. I think of it as taking ingredients from both parties and creating a soup that they both enjoy—even if one is a health-nut and the other one a pizza-lover. I have a sense of how cases should settle, based on how a judge might rule, and on my knowledge of case law. I apply the facts surrounding a mediation and help drill down on the key issues in order to resolve them quickly and reasonably.

EDGE: What is the typical number of meetings it takes to resolve a divorce mediation?

VZ: I have settled cases in one session when a couple wants to get divorced and be open-minded. But I’d say two to five, depending on the complexity of the case. I have a large mediation now and we are on our eighth meeting. However, the parties are saving hundreds of thousands of dollars by mediating versus litigating.

EDGE: Is a good mediation one where both sides give in?

VZ: Yes. I always say a good deal is when both parties are unhappy. Nobody loses. Nobody wins. They have both sculpted a deal that is fair—one they can live with and live by.

EDGE: If the people can’t stand each other, mediation still works if they can each talk to the mediator. Is this a skill that you feel defines you in your field?

VZ: I think so. I act as the neutral third party, helping two people come closer to seeing eye-to-eye on the division of their assets. Sometimes the parties only respond to me, and not each other, which is fine. It keeps the acrimony low.

EDGE: Describe a couple that simply does not belong in mediation.

VZ: One that wants to fight. One that wants to argue about non-issues and small things. One that wants to inflict emotional and financial pain. In mediation, both parties must be ready to listen, be open-minded, let go of anger and look to the future. If they don’t have some of those qualities walking through my door, they’ll be battling it out in divorce court for a long time.

EDGE: When you sit down with a couple, obviously you want to make a quick evaluation of them to determine your strategy. How good are you at “reading the room” that first time, and what are some of the things you look for that tell you it’s going to be a hard mediation or an easy one?

VZ: At first glance, when I meet a couple, I can tell if they want to fight or want to move on. After practicing for 14-plus years, I am pretty good at determining whether or not I can help the parties, usually within a few minutes. I listen to the way they speak and observe whether they are looking at each other or not. I take note of who is screaming and yelling, how reasonable their positions are, how they sit in their chairs, and whether they are making eye contact with me.

EDGE: How important is it in that first meeting to help people separate their anger or hurt or confusion over a failed marriage from the process of mediation? You almost have to play therapist in that respect, right?

VZ: I do wear two separate hats. The first is to explain that the courts don’t care about what went wrong in their marriage; it’s about dividing assets. I ask people to do their best to shelve their emotions during the process and to look at the case as if it were a business deal. Of course, that’s very difficult when love turns to hate. I have to drive home the idea that holding on to ill feelings will not help promote settlement or assist them in moving on to the next chapter in their lives.

EDGE: Mediators can give legal information but not legal advice. So if you see someone being completely toxic or lying about money and assets, how do you handle that?

VZ: I usually caucus—separate the parties and counsel, if they have representation present—and explain to the bullying client that he or she will not win in my office by behaving in a forceful manner. If a litigant lies, well, mediation cannot work. It must be an open and honest process; all the cards must be on the table. Mediation is supposed to be an environment where both parties are on a level playing field and have the mindset to resolve their entire case globally. The mediator takes the litigants’ words at face value. There is no oath taken—it is an informal process where both parties must be up-front about all of their income and assets for the mediation to be successful.

EDGE: You’ve been making television appearances for seven years now, on both news and entertainment shows. Is the Bravo series the first one that’s come to you?

VZ: No. I’ve mulled over other offers in the past, but they were not the right fit. This opportunity is a perfect match for me, the couples and the viewers. I’d shied away with my personal life being on the air, but it is part of the storytelling. I understand there is a recipe for success in TV—viewers need to understand what makes you tick, what makes you love what you do, what makes you successful at what you do—and that means granting access. In this series, it will be 10 percent personal life and 90 percent my professional life. As much as possible, the focus will be on the couples.

EDGE: Even so, there is always that aspect of being at the mercy of the editing room.

VZ: That is always a challenge. I always have to protect my integrity and my reputation. But working with professionals makes my life much easier.

EDGE: So why stick your neck out?

VZ: This series will educate a huge, mass audience on how to get divorced in an intelligent and less-emotional way. I love television. I enjoy being on the air, and I think it comes naturally to me. And helping people is who I am and what I’m all about. It’s the perfect marriage for me. No pun intended.

Editor’s Note: Vikki Ziegler Payne is a founding partner at the Livingston firm of Ziegler & Zemsky LLC. After graduating from the University of Rhode Island and the Quinnipiac College School of Law, she returned to her home state of New Jersey to clerk for judge Michael Diamond in the Family Division of the Superior Court in Passaic County. While under his tutelage, Ziegler began honing her skills as a mediator. To date, she has settled 99 percent of her cases. Ziegler authored Your Pre-Marital Survival Guide and The Pre-Marital Planner. Her official web site is vikkiziegler.com. 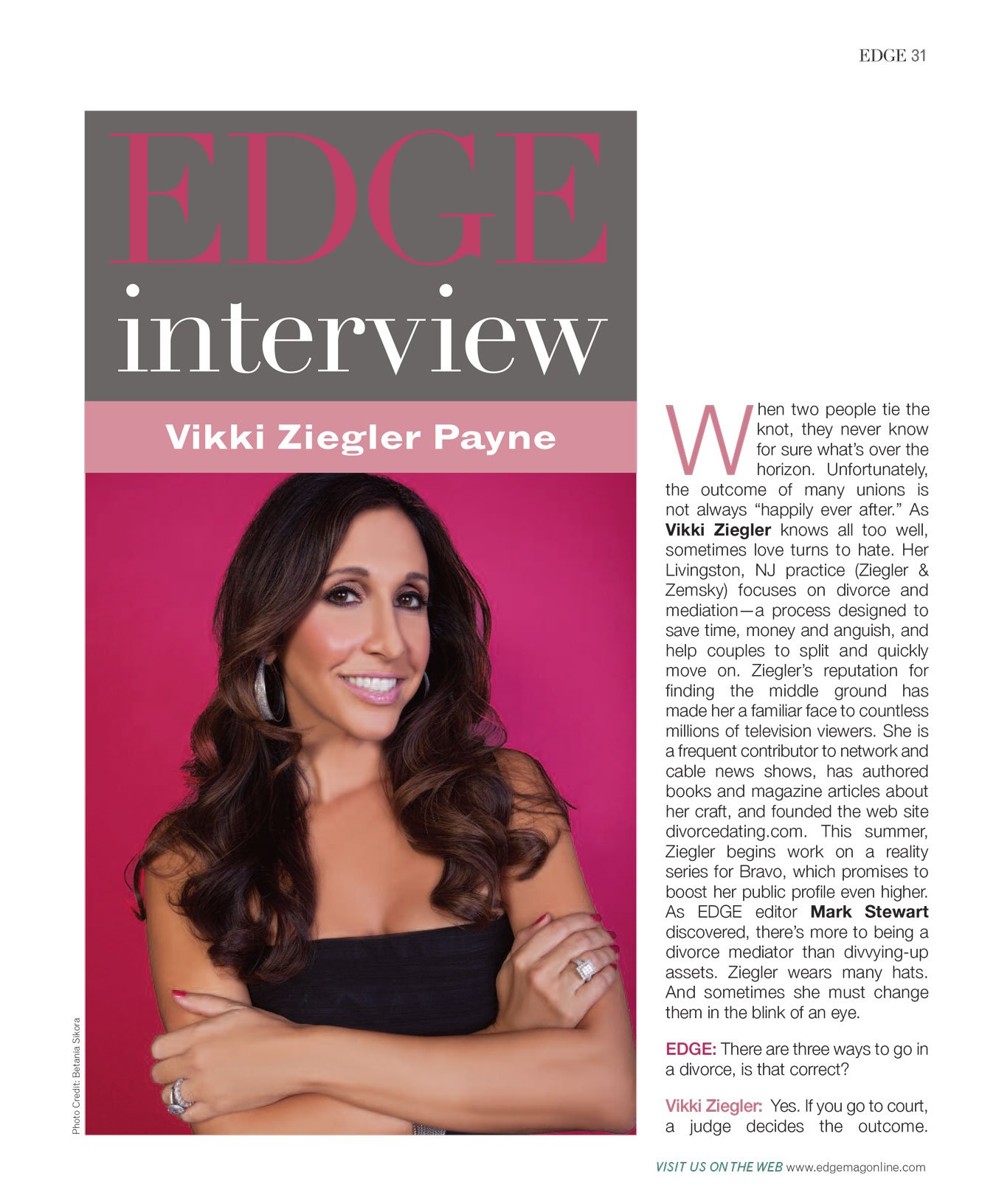