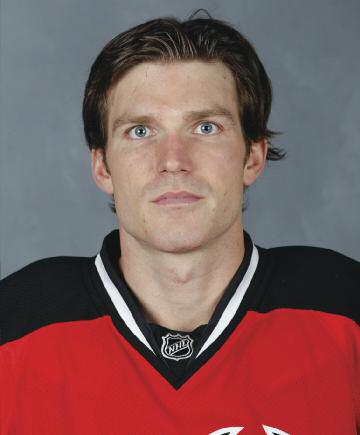 Some athletes seem destined for stardom before they reach their teens. Others blossom in adolescence or soon after. And then there are those fascinating few whom stardom kind of “creeps up on”—taking them, their fans, their friends and family, and even their sport, largely by surprise. David Clarkson is okay with being one of those athletes. The high-scoring star of the Devils was a major reason why they made it all the way to the Stanley Cup Finals last spring, yet it wasn’t too long ago that he was undrafted and ignored by all 30 professional hockey teams. That kind of career arc tends to ground a guy in reality. It also enables him to savor the sweetness of success. EDGE Editor Mark Stewart grabbed Clarkson after a recent practice at the Prudential Center and talked about the Toronto native’s design for living. Turns out it hasn’t changed much since he was scrapping for a spot on an NHL roster. Clarkson takes it one day at a time, finding subtle ways to improve, enjoying life’s little pleasures and appreciating every new day. 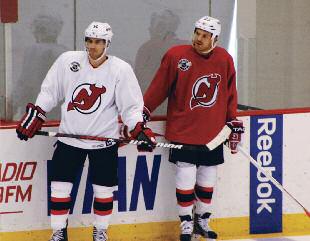 EDGE: Consistency is such an important part of an athlete’s life. Not just on the ice after the puck drops, but before you even get to the rink. What are some of the things you do on game day that keep you in a consistent rhythm?

JC: I’d say that I’m pretty superstitious. For the past five years, I’ve stopped at Starbucks on the way to every single home game. It’s part of my routine. I get my sticks ready at a certain time, I get a massage at a certain time. There are a lot of little things I do to prepare. I think it helps me relax and keep my mind off of details that aren’t related to the game. It’s also that, as you said, athletes are very routine-oriented people. When things are going well, a lot of us tend to do things like eat the same meal the night before games. If it worked once, why change?In terms of routine, on game day we usually have a morning skate, then I’ll go back home to West Orange and see my two-year-old daughter McKinnley for a little bit, take a nap after lunch, and head out to the game.

EDGE: What’s the meal you ask for at home when you’re in a groove?

DC: My wife, Brittney is a great cook and baker. I’m very lucky in that department. She makes this chicken with capers in an amazing sauce. I love that.

EDGE: What about when the Devils are on the road? Do you look for the same things on the menu, or do you experiment with local specialties?

DC: I might try something different for an appetizer, but I like to stick to the same entrées before games. Steak, for sure. And sometimes I’ll see what kind of fish is on the menu.

EDGE: What do you watch on TV?

DC: I grew up a huge Seinfeld fan. That’s one of my favorites. Lately I’ve become a big fan of Dexter and Homeland. And How I Met Your Mother.

EDGE: What’s on your iPod?

DC: Every kind of music. My dad was born in Scotland and my mom is Irish, so I have a lot of Rod Stewart on there. But a very wide range of artists, I’d have to say. I love music.

EDGE: Was it weird not playing hockey this fall?

DC: It was. Still, you try to make a positive when something bad happens. So I used that time to train more and get stronger. And I ended up going over to Austria and playing for a little bit. But you know, after the run we had to the Stanley Cup Finals last spring, we were all pretty banged up and tired. I liked being able to relax and see my daughter grow up. We travel a lot as athletes, so that time I got to spend with my wife and daughter was special. By the end, though, I think Brittney was sick of me being at home.  She was looking at the calendar wondering when I’d be getting back to work.

EDGE: A lot of our readers send their kids to hockey camp. What is David Clarkson’s great hockey camp story?

DC: I went to Brendan Shanahan’s hockey school as a kid. He was someone who played the game hard, and at the end of each camp they would hand out a stick for the player who’d worked the hardest. I got it one year—my dad still has that stick! But I was like any kid at a camp, dreaming about being here in an NHL locker room one day. I never thought I’d make it, of course, so it was pretty special just to be around those guys at that time in my life. 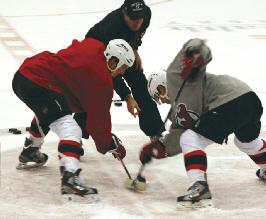 EDGE: You’d been on the Devils roster a couple of seasons when Shanahan joined the club in 2009 at the age of 40. Did he remember you as a camper?

DC: No. I had to show him pictures of me at the camp—when I was really, really little. He told me if I ever showed anyone else those pictures I’d be in trouble!

EDGE: This is your second time playing for the Devils’ coach, Peter DeBoer. Besides the fact you’re both older and wiser, has anything changed in a decade?

DC: No, he’s always coached the same, structured hockey. If you stick to his system, to what he’s preaching, you’ll be successful. I won a Memorial Cup with him in 2003 in Juniors and last year we went to the finals. So I think what he does with a team shows in the results. Where he goes, success follows.

EDGE: You’re one of the few stars in the NHL that went overlooked in the draft. How did the Devils discover you?

DC: Pete had a lot to do with it. I was 20, 21 years old and no one had drafted me. I didn’t know what was going to happen next. I had been to a couple of tryouts that Pete had arranged, but no one was really sure if I was good enough or tough enough. I think that pushed me harder to prove myself. I played one more year for him, and then the Devils and a couple of other teams called, and the Devils saw something and signed me. It just goes to show, it pays to work hard and do the little things well.

EDGE: What changed in your game to make you a goal-scorer last year, and even more so this year? Is that work you do in-season or during the off-season?

DC: It’s a very wide range of things. As an athlete you can never be happy with where you are. You always try to get better. Having a coach who put me in situations where I had to produce helped me, too. Pete believed in me. But I think in the summer, you have to go home, figure out what you want to get better at, and really work on it.

EDGE: When you say “work on it” does that mean work on the ice, in the weight room? Does that work happen between the ears? Where does that kind of transformational work have to take place?

DC: A lot of it is in your head, yes. But I’ve also hired people to help me with my skating and my hands over the summer. There’s a lot of training and a lot of pushing. I believe the day you are happy with where you are, that’s the day it starts going in the other direction. That’s something I’ve learned from the guys I’ve been lucky enough to play with in this organization.

EDGE: Whenever you’re on the ice, there’s definitely a buzz in the Prudential Center—not just when you’ve got the puck, but when you deliver a check or just get in a guy’s grill. Do you feed off that energy or are you oblivious to it?

DC: Oh, I feed off it. We are very lucky as Devils to have the type of fans we do. I don’t think we could have done what we did last year otherwise. When they start cheering, we get a real charge out on the ice. You really do feel that electricity from the fans. 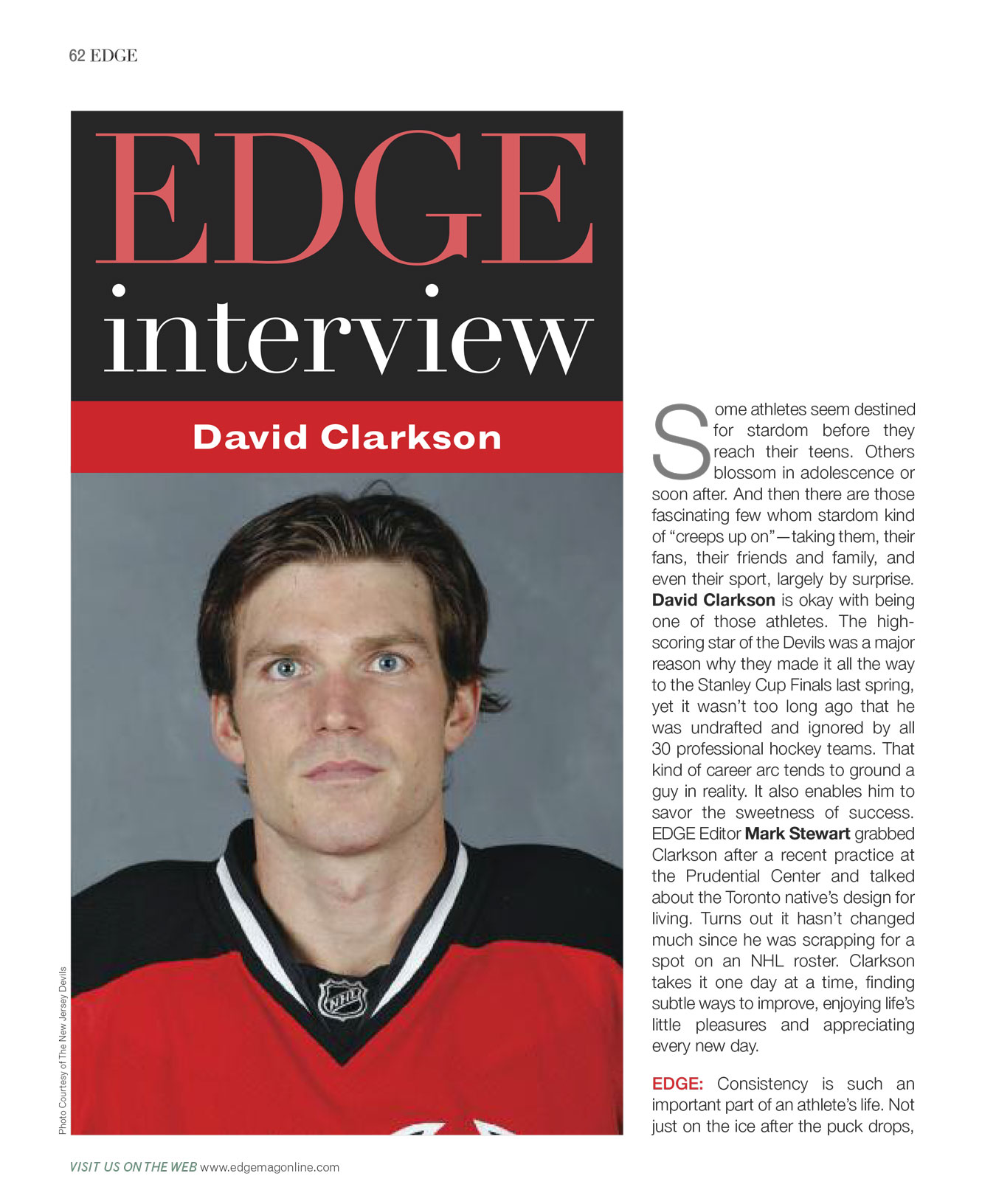 Your city has experienced remarkable growth since you came into office 20 years ago. Give me three reasons why.

Great geography…we are convenient to everything. Great diversity…more than 35 different languages are spoken here. And the Jersey Gardens Mall, which really led the way for Elizabeth to convert from a manufacturing economy to a service economy.

What’s the coolest thing about the city that almost no one knows about?

George Washington had lunch here on the way to his inauguration in New York. Also, America’s first ice cream soda was served on the corner of Fulton and 6th. Does anyone even drink ice cream soda anymore?

If you could bottle one thing about your city and sell it—not including ice cream soda—what would it be?

The strength of the people. They are focused, determined and always looking for opportunities to succeed.

What’s changed the most about politics during your two decades as mayor?

The general demeanor. People who disagree with your policies feel it’s now okay to paint you as a horrible human being because of them. Also, thanks to social media, people can say or do whatever they please, regardless of the truth, and it becomes part of the permanent record.

What part of your job takes way more time than anyone can imagine?

Scheduling. I might have to be eight or ten different places on a Saturday.

What is the hardest thing to say NO to as mayor?

Saying no to promotions because of budget constraints. Sometimes the things you know will help your town are not possible because of decisions made at the state or national level.

Who were your heroes growing up in Elizabeth?

Teachers. They were encouraging, informative and fun to be around.

Dodgers, actually. My father was a Brooklyn fan, so we rooted for them after they moved to Los Angeles. Sandy Koufax made a big impression on me, even though I was a right-hander. He seemed like the quintessential baseball player.

What did you think you’d be doing when you grew up?

I had no idea. You don’t need to have a set plan. You just need a direction.
What first intrigued you about politics?

I had a brother born with Down Syndrome and severe disabilities that prevented him from living at home. A local Councilman, Maurice O’Keefe, picked up the phone and got my brother into a facility where he could be cared for properly. I was really moved by this. I saw firsthand how politics could help people. When Maurice lost his election in 1978, I got into politics and ended up taking his seat on the City Council four years later.

What is the origin of the name Bollwage?

German. My sister traced our family to Pine Street in the early 1800s. I bet we were leftover Hessians from the Revolutionary War!

In this town, with so many great restaurants, I’ll get in trouble no matter what I answer.

Okay, when your wife offers to make you something special for dinner, what do you ask for?

Reservations…Uh-oh, I’ll probably get in trouble for that answer, too. 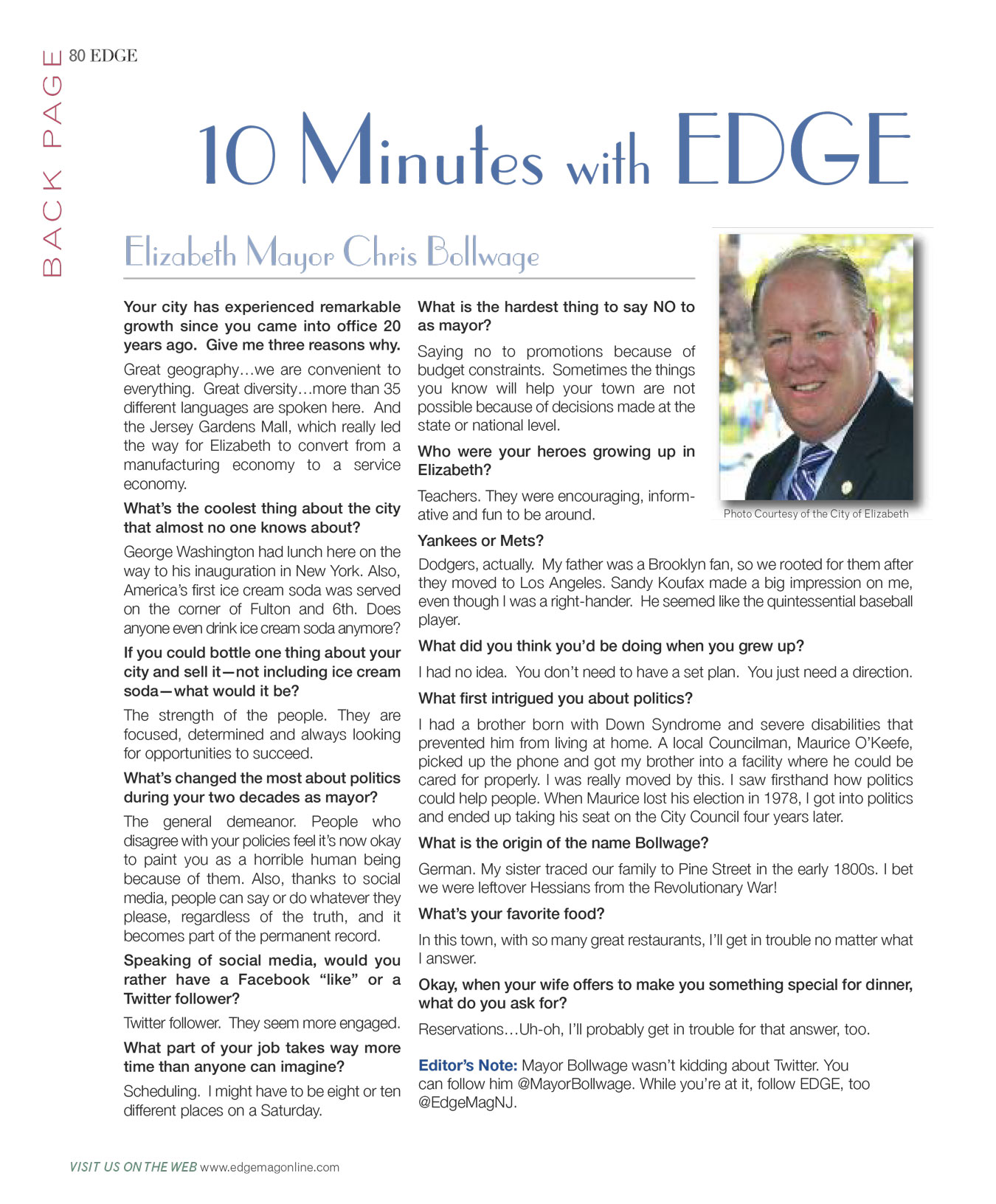