Let’s Put On A Show! 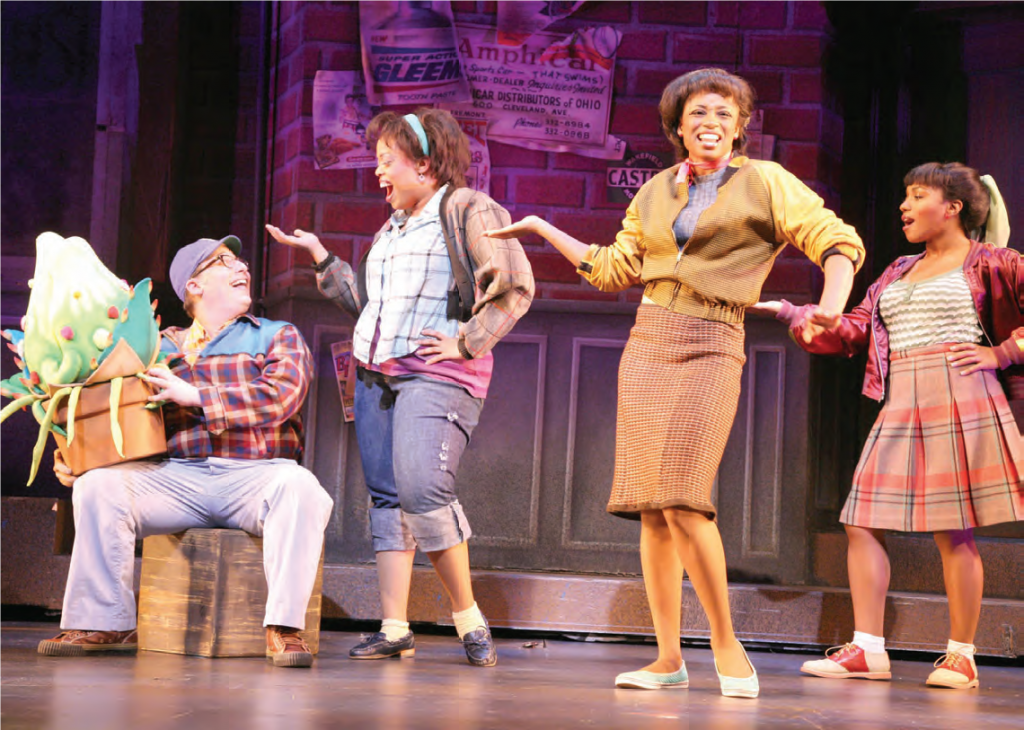 Oh, were it only that simple. Big names may help Paper Mill Playhouse stay afloat, but it’s cultivating the little ones that guarantees a bright future 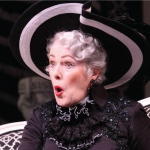 Financial Crisis May Force Paper Mill Playhouse To Go Dark. That was a headline from April 2007—not 2008 or 2009. Perhaps the timing was a blessing. Had New Jersey’s state theater run aground amidst of the current financial crisis, it might have gone the way of Lehman Brothers. Instead, a few weeks later, thanks to $300,000 in donations, audiences were treated to a rousing production of Seven Brides for Seven Brothers. Next, the Township of Millburn stepped in and purchased its Brookside Drive land and buildings for $9 million, then leased them back to Paper Mill for 75 years as a hands-off landlord. Present crisis averted, the folks that run PMP began thinking about the future. The buzz words they use are Inter-generational Programming. “Productions specifically designed to broaden our audience appeal to a younger group,” explains Shayne Miller, Director of Press and Public Relations. “By providing ‘family favorite programming’ in our mix—for example High School Musical and Peter Pan—we may attract first-timers to the theater as parents taking their children.

These parents are likely to be in the important age group of 35 to 55. Once at the theater, we have the opportunity to convert these parents to return, as a couple, to additional shows in our season that may be more adult-focused. We can then target them via direct-response efforts.” Those efforts include trumpeting the big names that have graced the PMP stage since it began operating some 75 years ago. Lynn Redgrave (top left), Ann Hathaway, Patrick Swayze, Bernadette Peters, Liza Minnelli, Chita Rivera, Carol Channing, Betty Buckley, Ann Miller, Estelle Parsons, Edward Villella and Nick Jonas (yes, that Nick Jonas) are among the luminaries whose credits include Paper Mill appearances. This past fall, Paper Mill 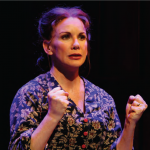 Playhouse presented Laura Ingalls Wilder’s Little House on the Prairie as a musical. It starred Melissa Gilbert (middle left), who played Laura in the famed television series from the age of 9 to the age of 20. In this production, the 45-year-old Gilbert—who recently served two terms as president of the Screen Actors Guild—was cast as Ma.

Another noteworthy notch in PMP’s belt. “We will also look for shows with broad inter-generational appeal, like 1776 (bottom left),” adds Miller, “which was appealing to seniors, parents, school groups and children. Our Children’s Theater and Education programs can also serve as an entry point to the theater.” For Artistic Director Mark Hoebee and Executive Mark Jones (left), reaching out to young audiences is more than just a marketing strategy. He sees the theater’s playing an important part in the Garden State’s education picture. “We need to have the arts in our children’s live as they are being educated,” says Jones. “Our role, within that, and in the state of New Jersey, is to have a statewide Theater Education program.

It doesn’t just bus kids in to see one of our mainstage productions, but actually works in the schools proactively, runs a healthy theater school with five hundred people enrolled— which we have—and runs one of the best summer conservatories in America. The Paper Mill’s ‘Rising Star Award’ program, which encompasses all twenty-one counties in the state, is very popular.” Whatever the future holds for Paper Mill, and the arts in general, some things will never change. “We’re unique,” says Jones, “because we have original productions of musical theater classics, as well as new works. Here at Paper Mill, we put our stamp on everything we create.” 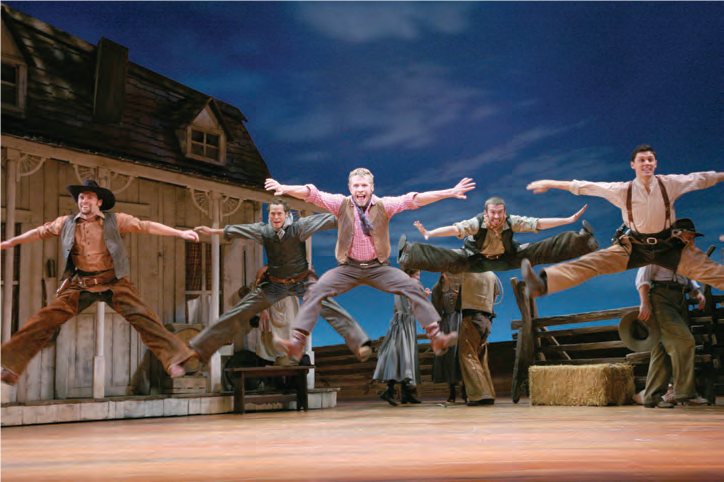 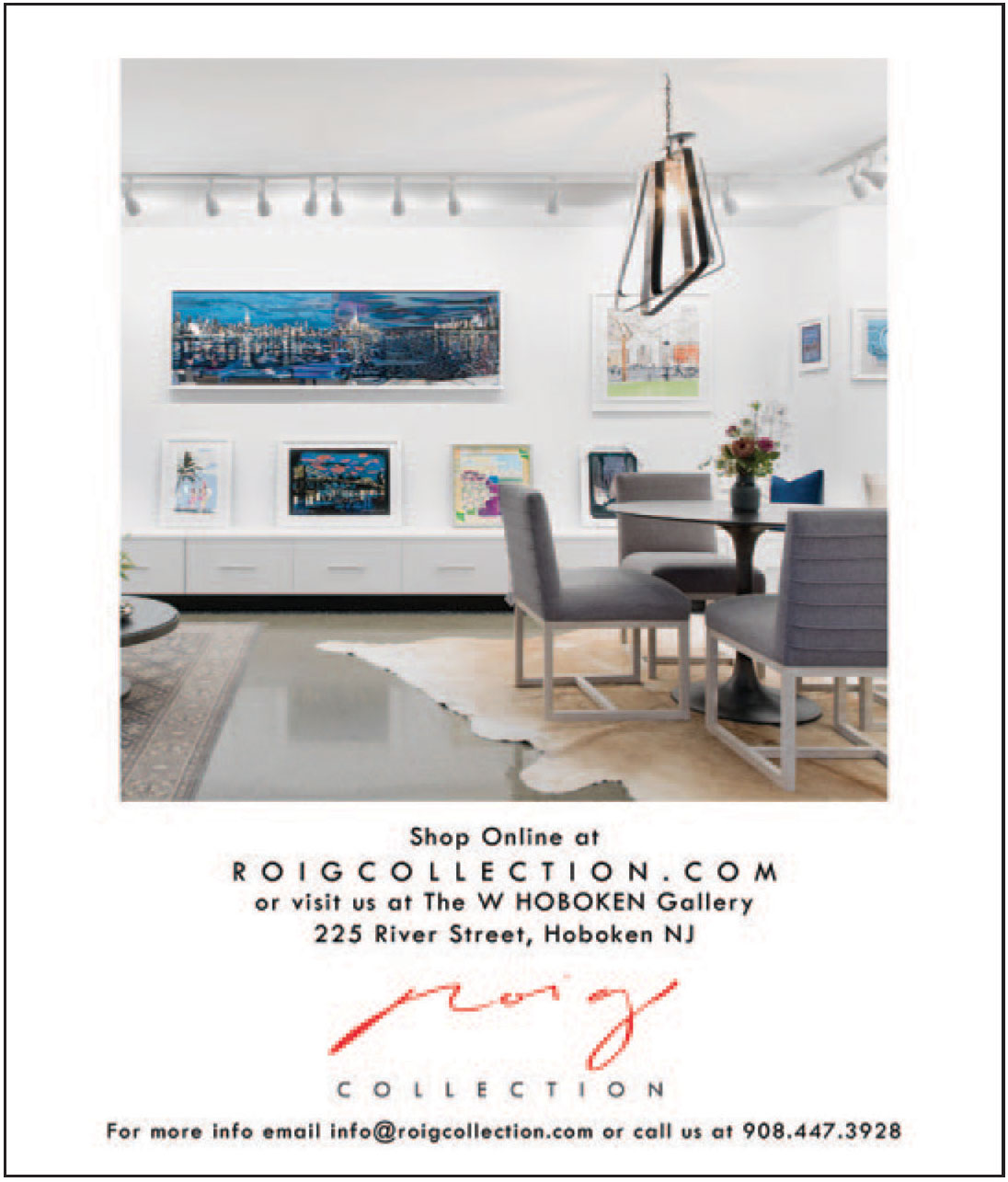 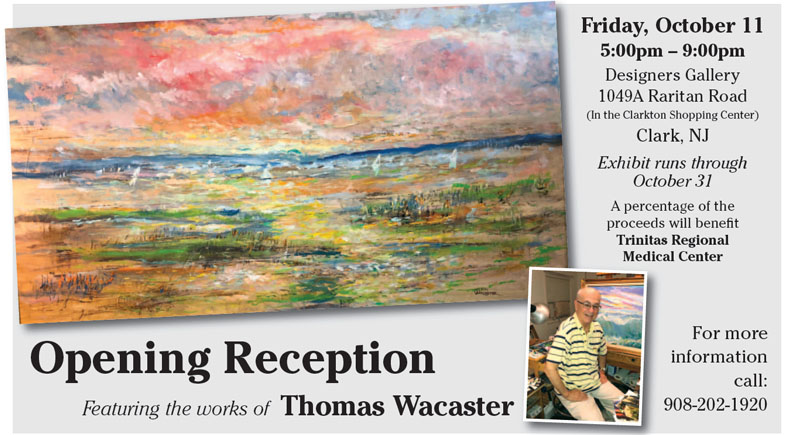 In Search of the Ultimate Sports Poster 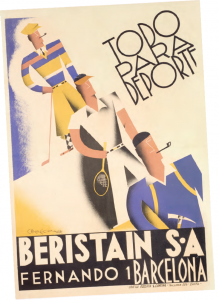 Most experts agree that there are four cornerstones to a successful marriage. 1. Trust. 2. Honesty. 3. Unexpressed anger. 4. No sports junk on the walls. Many a man has tested rule #4 only to see that framed jersey or signed photo, without warning, donated to a local charity auction. Like a game of Jumanji, the priceless 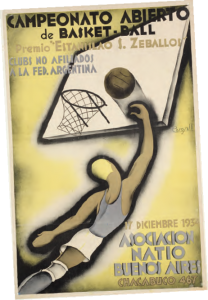 heirloom insidiously then works its way into another home, where it initiates marital chaos all over again. Bill Crouse is the exception that proves rule #4. One of the world’s leading authorities on Art Deco posters, his collection may be the best ever assembled. When Crouse purchases a sports poster, it’s invariably a jaw-dropper. In these pages we present a handful of sporting selections from the renowned Crouse Collection. You won’t find these masterpieces at your suburban gala or fundraiser. You will see them in museums and galleries in Europe and the U.S. (including right now at the Guggenheim’s Chaos and Classicism exhibit). If you want to buy them at auction, be prepared to spend somewhere in the mid-six figures!

Cycles Brillant • A. M. Cassandre (1901-1968) Only a few copies of this 1925 poster—a gleaming example of Cassandre’s adherence to minimalism—are know to exist. Not many commercial artists would be brave enough to hand a client an ad concept for a bicycle that shows no details of the product. Even fewer could actually pull it off. 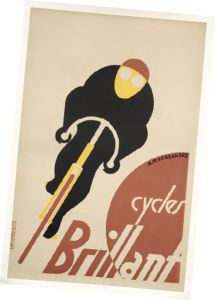 Art Deco posterists. In this advertisement for a 1934 tournament, Caroselli used this technique—along with an airbrushed black “cocoon”—to capture the energy of a layup. 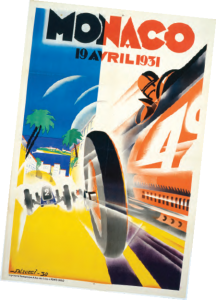 Monaco/19 Avril 1931 • Robert Falcucci (1900-1989) This rarest of Monaco GP posters—possibly the only example in private hands—shows a Mercedes SSK in hot pursuit of a red Bugatti. Falcucci’s use of white streaks running the length of the racer, concentric arcs of white behind to convey the rush of the wind, and the bright palette of red, yellow and blue give this streamlined design great panache. A multitalented painter, decorator and illustrator, Falcucci received his formal training in Paris and served as the historical painter for the French Army.

Beristain/Todo Para Deportes • Jacint Bofarull (1903-?) on prior page Although Bofarull earned a reputation as a politically outspoken artist, none of his political leanings are evident in this promotion for Beristain’s Barcelona department store and its line of sporting equipment and apparel. Despite the fact that pipe-smoking is no longer a part of sports, it would not be a stretch to call this 80-year-old poster “timeless.” 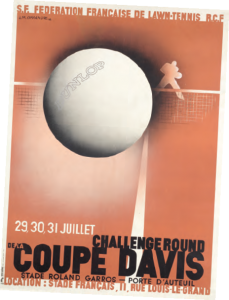 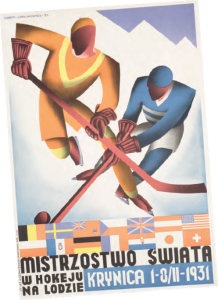 attention by placing them in the path of an oncoming shot at net. The use of geometry and dynamic perspective in this extraordinarily rare poster— as well as the ease with which the design’s elements are assembled—are superb examples of what made Cassandre the most important Art Deco figure in the history of advertising posters.

Mistrzostwo Swiata/Krynica 1931 • Stefan Osiecki (1902-1939) Jerzy Skolimowski (1907-1985) This promotion for the 1931 World Ice Hockey Championships in Poland can barely contain the action within the frame. The featureless depiction of the competitors captures the team-oriented nature of the sport, while the flags along the bottom clearly convey that 10 national teams will by vying for the title.

Sables d’Or les Pins • Lec (Dates Unknown) For the dedicated golfer, playing a well-designed course borders on a religious experience. In this breathtaking 1926 poster, the artist captures this feel using a stained-glass style. 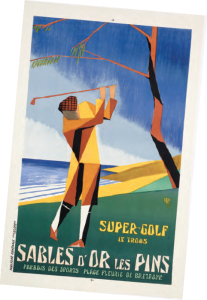 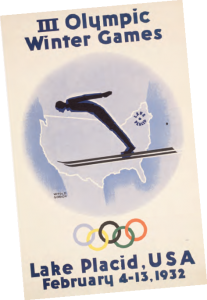 World’s Greatest Air Race • Percy Trompf (1902-1964) The 1934 England-to- Australia air race covered more than 11,000 miles and was won by Lieutenant Charles William Anderson Scott and Captain Tom Campbell Black. Their scarlet DH.88 Comet finished with a time of 71 hours. Art Deco posters typically pared down or simplified the human element. However, in this poster, Trompf chose to zero in on the pilot’s face to convey the focus, determination and uncompromising will of the participants. Trompf created thousands of posters for companies in his native Australia, and attracted clients in England and Canada, too. 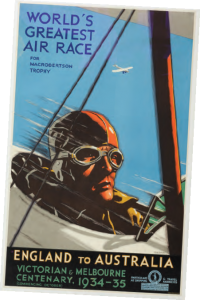 1er Campeonato Mondial de Football • Guillermo Laborde (1886-1940) This poster for the inaugural World Cup is the Holy Grail collectible for soccer fans. Laborde conveys the action and athleticism of the sport with 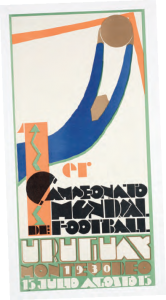 just a few linear elements. An acclaimed South American artist and sculptor, he agreed to judge the poster submissions for the 1930 World Cup. Later, Laborde resigned from the panel and submitted two of his own—which came in first and third.

Editor’s Note: Special thanks to Tim Gazinski for his assistance in selecting and describing these posters. William Crouse’s 2009 book Grand Prix Automobile de Monaco Posters was hailed as “unmatched in the field” by the International Poster Center. 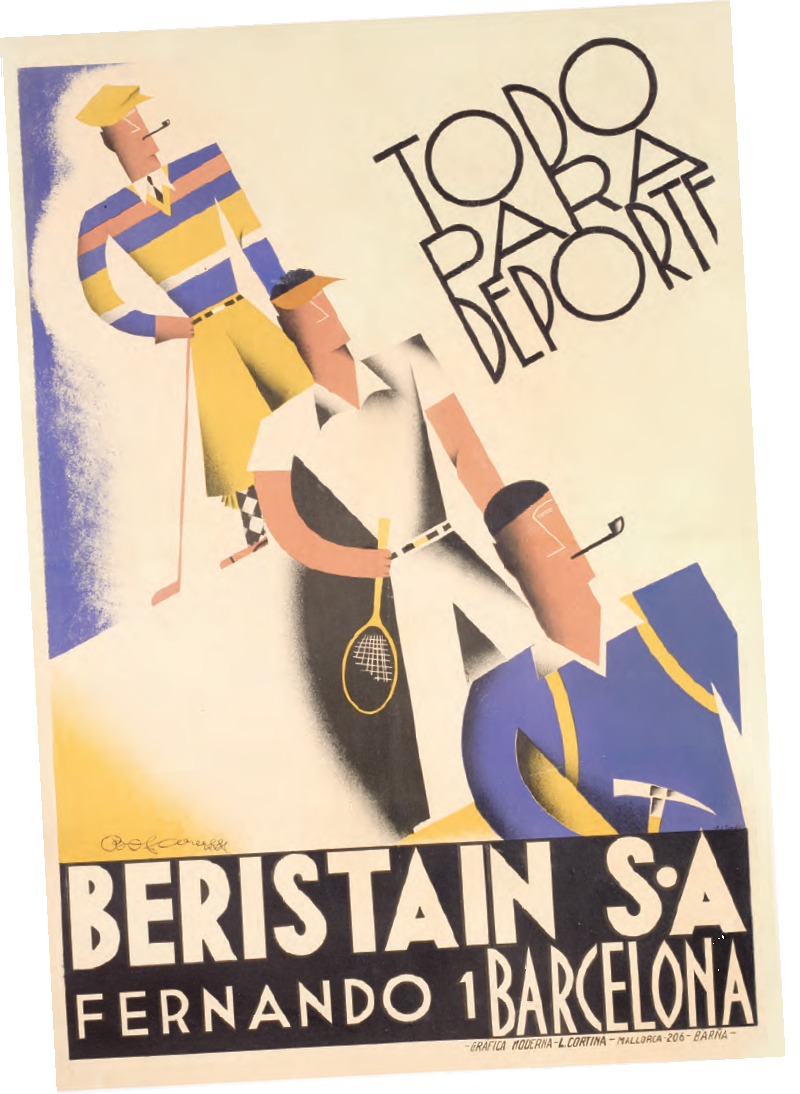